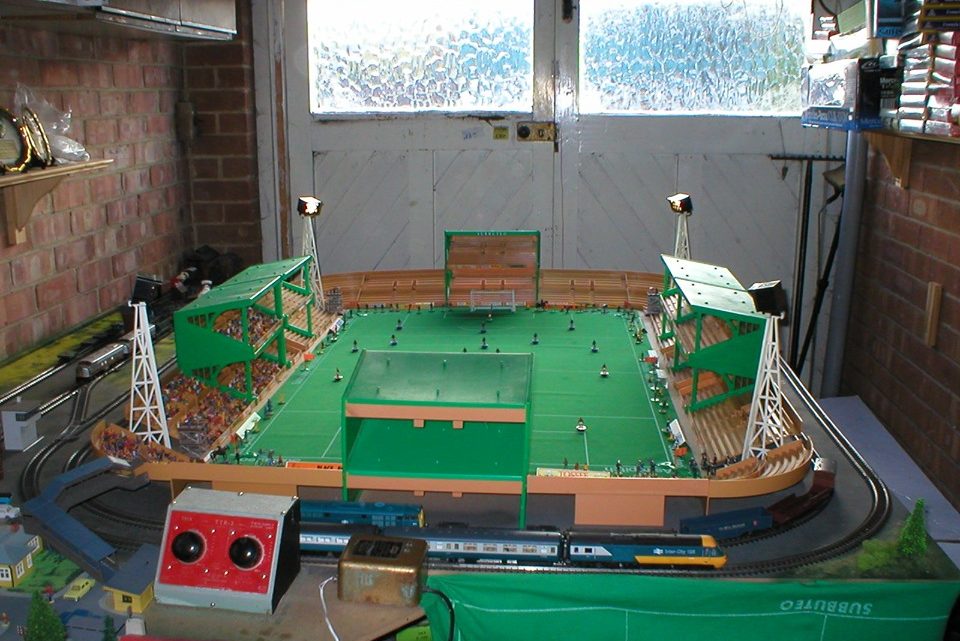 A Subbuteo stadium with a working train track

There is something special about a football stadium near a train track.

Having spent several hours stranded at Crewe station staring at the floodlights and partially obscured stands at Gresty Road, we believe train stations near football grounds are a good thing.

Some of you may remember the video that went viral last year showing a steam train driving into a football stadium between the pitch and the stand – and that is also a very good thing.

The popularity of Hornby in the UK and the fact much of the popular model train manufacturer’s wares is actually 00-scale – the same as Subbuteo – means it was only a matter of time before modellers added a train track to a Subbuteo stadium.

That is exactly what has happened with Terry Rowland, whose old-style Subbuteo stadium is a beautiful example of trains and Subbuteo coming together.

The stadium itself is a classic build featuring a handful of the original green grandstands and a full surround of tan terraces. It includes old-style floodlights and the only real modern addition are advertising hoardings at pitchside.

Outside the stadium there is a train track running around the stadium with model trains able to get a full view of the stands. There’s also a mini village including a station, roads and buildings to add a bit of realism to the scene.

We asked Terry about the fantastic setup and he confirmed it was an old design. The set is now packed away in the loft but thankfully he has these pictures to inspire other Subbuteo fans who may want to add a railway to their stadium builds.