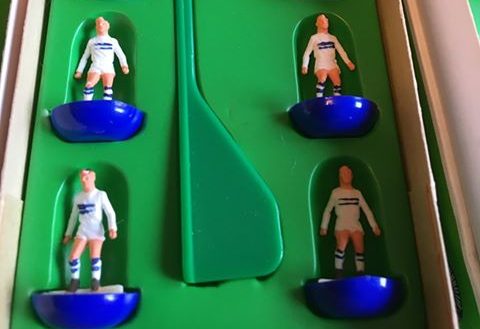 It is the Subbuteo collection that we all dream of pulling out of the loft.

A Subbuteo fan has revealed a Subbuteo collection with some incredibly rare teams – and it is all for sale.

Mark contacted Subbuteo.Online with some pictures of Subbuteo teams he bought when he was a child and, unlike many of us, actually held on to them.

It is lucky he did because the pictures show a couple of very rare Subbuteo teams including Plymouth (ref 199) and an Aldershot team (ref 308). The latter recently sold on eBay for £170 on its own thanks to the rarity of the kit in the Subbuteo collector world.

Other highlights include a Philadelphia Atoms team. The club participated in the North American Soccer League (NASL) and was one of a few US teams that were made by Subbuteo. These teams are fairly rare given not many were made and it is unusual to see it in an original Subbuteo collection.

Mark says: “I think I started getting into Subbuteo around 1977/78 because my best mate had a set and we used to spend rainy days playing and trying to perfect the curved roll of the players, unsuccessfully if I remember.

“I then got a basic set for either birthday or Christmas. My Dad gave me a massive piece of solid marine ply to have a level pitch, which was an improvement on the ploughed field if the carpet was used! It turned out to be a pocket money swallowing game, saving up for bits and pieces, Ball boys, Police etc, fencing, different sized balls, supposedly to improve our skills.”

But why Aldershot and Philadelphia Atoms? The reasons for buying them should resonate with Subbuteo fans all over.

“The teams I bought I can remember some of the reasons I bought them. Spurs are my favourite team, England for obvious reasons but I got the second kit as it is a bit more colourful.

He continues: “Italy because the won the World Cup and Aldershot were a local team, Plymouth and Philadelphia because they looked good and they were a bit exotic (I was young!). All purchased from a local store in Basingstoke called Cordings.”

However, he is now looking to sell the set after digging it out of storage 40 years later.

He says: “As with all things you get older the set was put away and followed me around for the last 40+ years I only dug it out recently after a friend at work saying he played golf with someone who collected it. Finding it again in the garage still in great condition made me quite nostalgic I keep thinking about setting up again for a game!”

If you’re interested in buying a set get in touch at subbuteoonline@gmail.com. We’ll pass your details on to the seller.

Or join our Facebook group for more Subbuteo for sale.