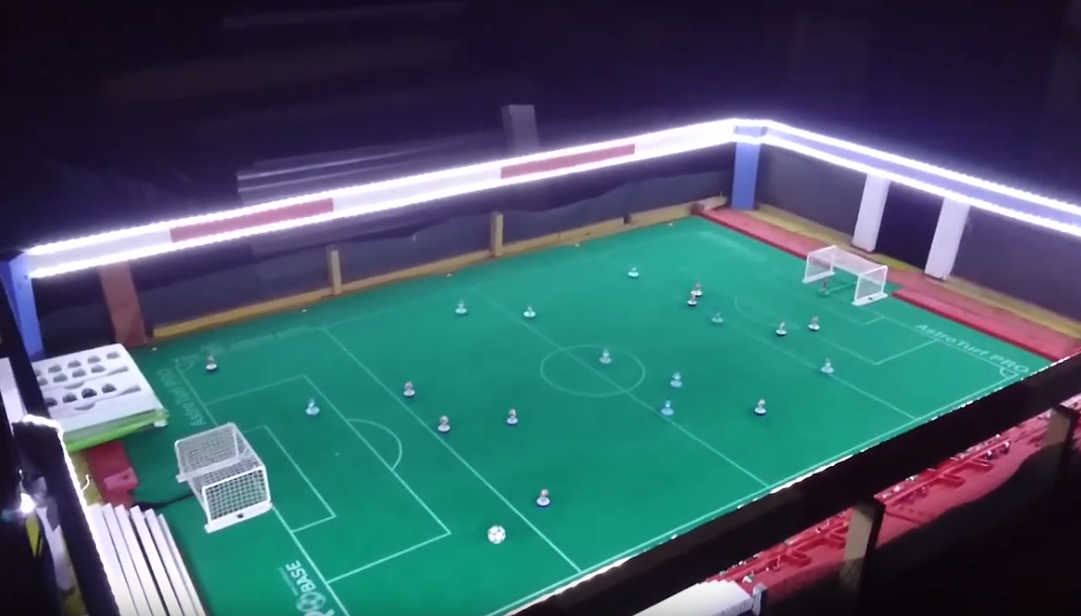 A Subbuteo stadium with a clever working floodlight design

Subbuteo stadiums come in all shapes and sizes but one thing seems to be a problem for anybody building their dream ground.

Subbuteo floodlights definitely look the part. the older pylons are beautiful, traditional-style accessories for any stadium while the more modern Greek-style floodlights are neat and minimalist.

But neither of the official Subbuteo accessories are perfect because they do not give off enough light.

If you want a truly detailed Subbuteo stadium you will have to modify the original floodlights using LEDs or use non-Subbuteo options.

A ground shared by Vito Caprero on his Youtube channel uses the latter method but it is not a system we have ever seen before.

Vito has surrounded his stadium in a continuous wrap of LED lights held up with pillars for a superb floodlighting effect that does not impede play on the pitch.

The ingenious lighting solution is simply two strips of LEDs wrapped around the pitch and it provides more than enough light to play the game even with the room lights switched off.

The build even has space for a row of red terraces around the Astrobase pitch, while you can easily see how things like a scoreboard could be added without impeding play or getting in the way of the lights.

The LED strips would also work at the top of a grandstand for those who want a design that is a lot closer to real stadium builds.

It is one of several interesting solutions players have come up with to get the full night match effect in a Subbuteo stadium.