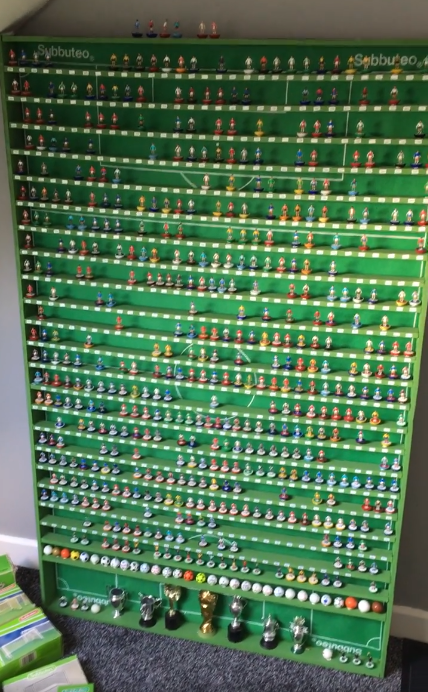 When Subbuteo collector Carl Nelson shared a video of his collection on Facebook there was one thing that stood out straight away.

Usually we would be left drooling over the box sets featured in his collection but as the camera panned round we only had eyes for a stunning Subbuteo display that featured hundreds of individual players.

Not only was the single player collection huge it was also mounted on a stunning backboard the size of a Subbuteo pitch. It also included trophies and balls and all together has to be one of the best ideas for a Subbuteo display we have ever seen.

The players are all from the lightweight era of Subbuteo that started in the early 1980s. There are over 800 lightweight teams and plenty of variations so Carl has his work cut out getting them all.

He said: ” They are all machine print lightweight with space for one of each reference and variations. Few trophies and balls on there too.”

When asked about his favourites in the collection he added: “I like trying to find the ones that I’ve never seen anywhere before so ref 764 Eintracht Frankfurt is one of my favourites. I haven’t seen that for sale anywhere in my time of collecting. I also like the logo teams such as Arsenal JVC home and away. Favourite international team would be Belgium ref 499.

“But there are too many to choose really and I change my mind all the time.”

Thanks to Carl for sharing his display. You can see more amazing Subbuteo collections here.