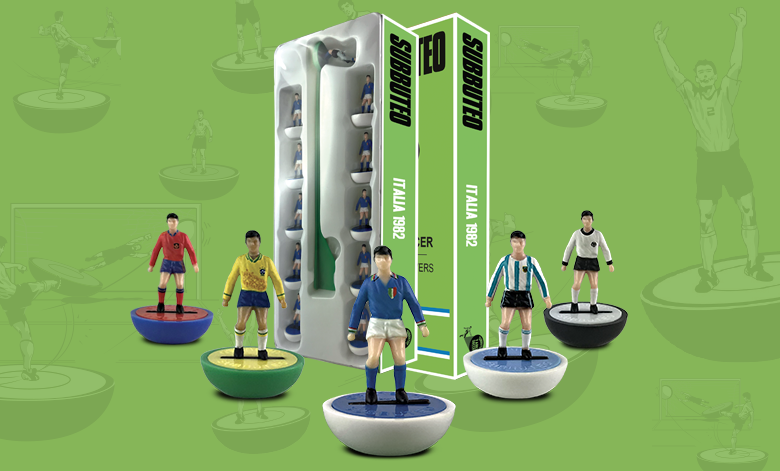 This is the first look at a magazine advert for the new Subbuteo La Leggenda Platinum Edition range being launched this week.

The newest Subbuteo sets licensed by Hasbro are being launched as a part-work in Italy, meaning boxes are being sold alongside a weekly magazine with all 80 sets plus accessories completing the collection.

The advert comes with the tagline ‘Who says you can not use your hands in football’ and the image of the new teams being flicked across a Subbuteo pitch. The price, 6.99 Euros, is for the first set and will rise as more are released.

The new Subbuteo La Leggenda Platinum range are available in Italy only and promise to recreate 80 of the best ever international football sides in the classical heavyweight style. They follow similar La Leggenda ranges that mimicked the 1980s and 1990s lightweight design and featured both club and international sides.

Following Italy are a host of other classic international teams including England’s 1966 World Cup winners, Brazil, Holland and USSR. Other teams will be announced later as the sets are sold.

Accessories including referee sets, balls, goals and a pitch will also be released alongside the teams and each set will have a magazine with information about the team itself, from formations to players.

Subbuteo La Leggenda Platinum is the newest official Subbuteo collector’s set and despite not being sold in the UK, sets are expected to appear on auction websites because of the level of interest in the new range.