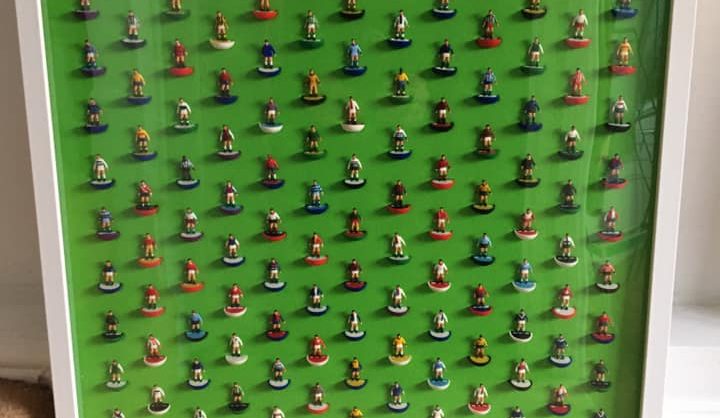 How this wonderful Subbuteo single player display was built

The Subbuteo team colours chart is an iconic part of Subbuteo history.

Usually based on a white or green background, you will remember the old Subbuteo team chart posters for their beautiful simplicity. They were included with catalogues of the 1970s and featured individual players from all of the Subbuteo teams.

In modern times collectors have been clever in recreating the team colours chart but a recent lockdown project is one of the best-looking creations around.

Andrew Chippett shared his team colours-inspired single player display featuring some of the most famous Subbuteo teams in all of their glory.

The players are hand-painted Santiago players, which means Andrew is able to display replicas of some of the rarest and most beloved of the Subbuteo range.

Here is how he did it:

“(It uses) foam board as backing. That was the most painstaking bit of it all measuring up and cutting , but very pleased how the players sit in the board.

“I tried to have the green as near to the Subbuteo green from the insert of team boxes from the seventies as possible . I really enjoyed painting the players but always in the back of mind was the fact that they are not original 70s heavyweight.

“But still it’s something I have been thinking of doing for a few years , but never found the time until lockdown , even though I’m a postie so have been working all the way so far through this horrible pandemic.

“The frame is from IKEA which needed a bit of adjustment. Always loved Subbuteo , and very good memories of playing it with my three brothers mainly in the Seventies ( there were so many rows we could have done with VAR then!) before I painted the chart I did a very similar thing with a smaller frame with the history of Bristol rovers kit.”

We think the display looks superb and the choice to hand paint is a clever one – not only does it mean he can avoid braking up box sets to place single players in the frame it also means he can pick and choose the perfect teams for a beautiful display.

Now, I’m off to Ikea to get a frame and recreate this masterpiece.