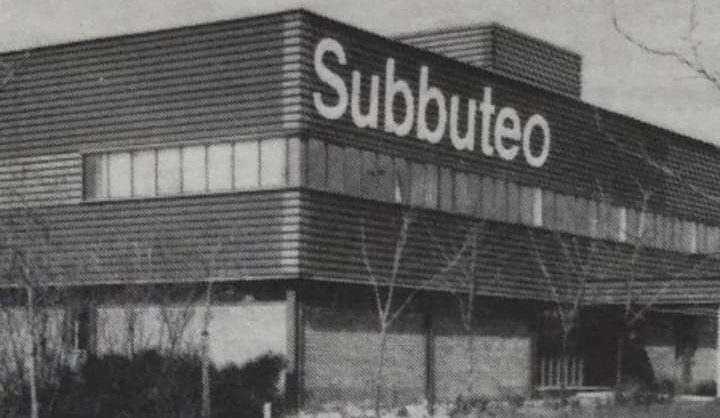 The former Subbuteo factory is available to rent

Last week an image of the former Subbuteo factory in Washington, North East England, was doing the rounds in the community.

The picture was taken some time around 1982 in Washington, Tyne and Wear. This was the temporary Subbuteo factory set up shortly after Subbuteo started to produce machine-painted players and were moving away from the army of home workers.

Now owned by Waddington’s, Subbuteo used this factory for little more than a year before moving to a more permanent home in Leeds.

Amazingly, a Subbuteo fan contacted us shortly after posting the picture to reveal he is a letting agent and is currently marketing the very same factory.

Russell said: “Interestingly I think we may be now looking for a tenant for that very same building! Details attached.Certainly looks like it!”

And as he suggests, the factory is actually available to rent. Unit 1 on Crowther Industrial estate is listed as a 15,567 sq ft unit with two stories of offices and 20 parking spaces.

The building is available for £64,600 per year and is described as a ‘semidetached’ steel frame construction with brick and black walls’ by letting agent HTA Real Estate. It has large office space that would have once been the home of Subbuteo’s manufacturing facility admin team.

Unfortunately, the building would need to be refurbished before it can be used and the giant Subbuteo letters adorning the side are long gone. However, it’s a great bit of Subbuteo history.

In a dream world somebody would snap it up as a Subbuteo venue, museum and tournament base like that of SubbuteoLand in Italy – but that is very unlikely to ever happen. Imagine 15,000 square foot of tables, displays and shops selling everything Subbuteo? There’s probably even space for a Subbuteo bar and brewery for some flick-themed beers.

If you want to know more about the factory, Peter Upton on his wonderful Subbuteo website, says: “With the arrival of machine-painted teams, I guess the expensive southern workforce was no longer required. So Subbuteo spent 1982 on an industrial estate in Tyne and Wear, before settling in its new home of Castle Gate, Outen, Leeds. At the same time, the company name on the boxes changed from Subbuteo Sports Games Ltd, to “Subbuteo Sports Games, A Waddington Games Ltd company”.

“This was the final high point of Subbuteo production, and it was never the same again. It lost that personal touch which in the 1970’s, for instance, allowed you to order throw-in figures in ten different strips. The hard commercial world had finally caught up with Subbuteo.”