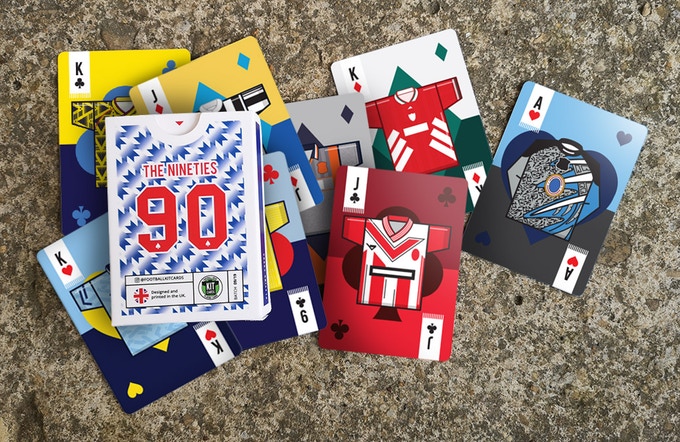 It is no secret that Subbuteo.Online was set up by somebody who discovered football in the 1990s.

Any 30-something fan of Subbuteo will tell you USA 94, Euro 96 and World Cup 1998 shaped their love of the game and the figures and teams they still remember fondly.

We still love the Cameroon Subbuteo team featuring Roger Milla and the Newcastle ‘Brown Ale’ away kit – and we will continue to argue that the fact Subbuteo never made Jorge Campos’ stunning Mexico goalkeeper shirts was a huge oversight.

But we are not the only people who love 1990s football and the beautiful kits it gave us. A Twitter account called @Kitcards1 caught our attention because they have a kickstarter that Subbuteo fans may fall in love with.

They are designing playing cards based on some of the most famous kits of the 1990s. That in itself is enough for us to dig out the Futurama ‘take my money’ meme but when you see the cards you will understand why we are so excited.

The cards are a lovely mix of nostalgia and beautiful design and it is not just us that thinks it – the cards have surged past the goal of £850 to well over £2,000 and rising as people scramble to get their hands on a set.

We spoke to the person behind Kit Cards to find out a little more.

But first, we wanted to know whether they were just kit fans, or if they also enjoyed a flickabout.

“I definitely played a lot of Subbuteo in the 90s. I got the Blackburn Rovers 1995 kit team for Christmas one year which I still remember clearly. Until that point I’d only had the two basic sets (red and blue) that came with the pitch. I also had the scoreboard where you change out the teams and scores (hours of fun!) and, eventually, two battery powered floodlights. Fancy!” 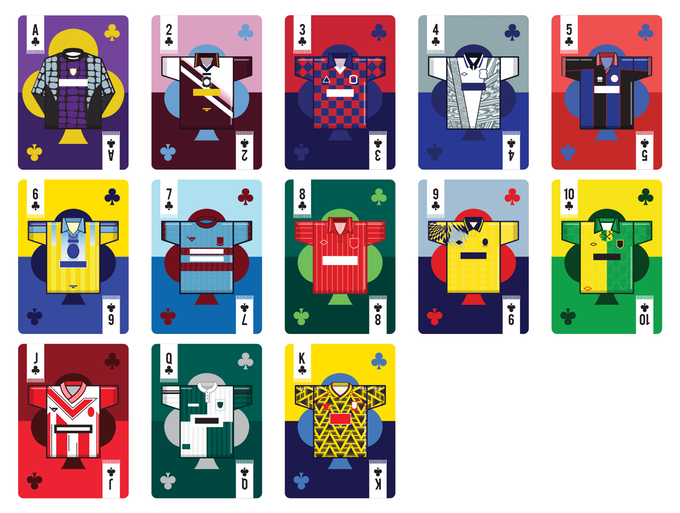 Now that is out of the way and the credentials have been checked, on to the cards themselves:

“I’m a graphic designer and the project started as an exploration into colour theory. I’d wanted to play with colour for a while and after listening to the Quickly Kevin podcast it seemed like a great excuse to draw up some representations of classic 90s football shirts. My eldest daughter (3 1/2 years) has also just started to play football and I found myself reminiscing about the football I knew and loved. Lets face it – it was better in the 90s.”

They list the England grey away kit of Euro 96 as favourite of the era, alongside Bournemouth’s distinctive black and red shirts.

And since the campaign has been a huge success we wanted to know what next for the cards.

“I’ve been really overwhelmed by the success of the Kickstarter campaign. The first few cards were only shown to a couple of mates initially but after their encouragement I started to share it all on Instagram (and lately, Twitter). There are so many projects I would like to work on (both football-related and otherwise) but time is tight working full-time and having 2 daughters (the youngest was born in March – in the middle of drawing up all the kits). I would love to do a ‘Classic International Shirts’ set and also the most iconic shirts from Serie A.”

You can see and support the Kickstarter here.