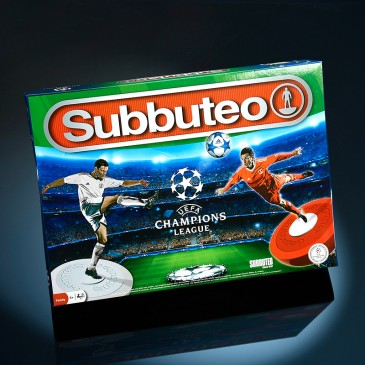 At the time of writing best-selling console game FIFA 19 is listed at around £20 for UK buyers.

You can get a copy of Football Manager, the superb management simulation, for around £20 too. Both are last year’s launches but most people will not be paying more than £50 for the new games once they arrive in Autumn.

Amazon’s best-selling board games are Scrabble and Monopoly at around £15 a set. A more advanced board game, Catan, is listed at around £20-£30 for the original edition.

There is plenty of competition out there for Subbuteo, the game many people believe no longer exists, so what it does need is low pricing and lots of availability to get a foothold in a competitive UK market.

Which is why selling a new Subbuteo box set for £45 tucked away at the bottom of a lone supplier’s website would be marketing suicide for any brand with even an ounce of sense.

In England Subbuteo is officially sold by just one supplier – Paul Lamond Games. It imports new sets and is the only company allowed to sell official Subbuteo products. You won’t find it on Amazon, or even on the shelves at Hamley’s stores anymore (as we reported on before Christmas).

However, Paul Lamond Games lists Subbuteo right at the bottom of its website below pre-school games, Chimp and Zoo games, Magic sets and something called Perudo.

More surprisingly, new Subbuteo sets are listed for an eye-watering £45. The price applies to an out-of-date Barcelona set and a Champions League edition that comprises two cheap-looking teams in plastic bags and a few loose accessories on a wafer-thin pitch.

In comparison, a classic Subbuteo Club Edition set or late-1980s box would sell for around £10-£20 on eBay, where retro Subbuteo is plentiful.

Dull, low-quality branded teams such as Barcelona are on sale at an astonishing £25 – as much as a rare classic set would sell for. Even standard teams with no actual club name attached are £15 on the site.

The ludicrous price of low-quality new Subbuteo in the UK and the fact the exclusivity agreement with Hasbro in Spain means it is cheaper for fans of the game to buy second-hand or order directly from places such as WeAreGames in Spain. Even with delivery costs it works out cheaper than the only place to buy official Subbuteo in the UK online.

As it stands Subbuteo is not launching new sets or teams that are worth buying. If they ever did it does not seem like UK buyers would ever get the chance to buy them – at least not for a reasonable price.

If Paul Lamond Games wants an exclusive license for Subbuteo, why is it seemingly doing everything in its power to put people off buying the game?