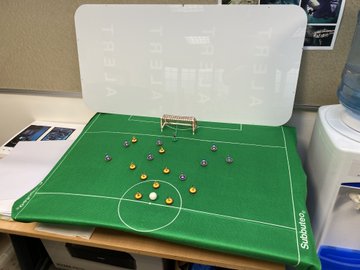 The story behind the Red Dwarf Partick Thistle Subbuteo team

Fans of long-running sci-fi comedy series Red Dwarf will have spotted a Subbuteo team in one of the newest episodes.

In the first part of Red Dwarf: The Promised Land main protagonist Dave Lister, played by Craig Charles, is hoarding old items he finds on the ship.

These include a Subbuteo box set and a Partick Thistle away team – something Lister says somebody out there would kill for.

He knows us only too well.

Catching mention of Subbuteo in one of the best sitcoms of all time caused a bit of excitement in the Subbuteo community and the man behind the appearance has now revealed a bit more about the box set and the how it came to be.

Matthew Clark, who is a designer on Red Dwarf, said he only had a couple of days to find a set on eBay, go and pick it up and then paint it to the correct colours. He also had to create a box from scratch.

In a series of tweets, he said: “As well as reinstating the bunk room dressing, we had to do the scripted props for Listy’s hoarding. Top of this list was the Subbuteo Partick Thistle away kit. Simple on paper, but not to make.

“We were given clearance to use a vintage 80’s box (which felt ‘correct’) so Lizzie bought one on eBay.

“Then she and Phoebe hand-painted the players into the period-correct Thistle strip. Then I set up a box photoshoot of said players, comped it together, had the box professionally silkscreened in the EXACT SHADE OF GREEN, and reassembled and then on the night they went with the tiny version instead.

“On telly, a lot of stuff gets cut on the day, and you do get used to it, but I wanted to emphasise how much work went into that one. *weeps*”

As well as reinstating the bunk room dressing, we had to do the scripted props for Listy’s hoarding. Top of this list was the Subbuteo Partick Thistle away kit. Simple on paper, but not to make. We were given clearance to use a vintage 80’s box (which felt ‘correct’)… #reddwarf

After a quick conversation with Subbuteo.Online he confirmed the purchase was very last minute.

He said: “I think we probably found this online about a day or two before it went on camera! It was a very quick creation, our buyer had to find a local one on eBay and drive out and get it that day!”

Of course, the Partick Thistle away kit would be one to kill for as it was never actually made by Subbuteo, There was a Partick home kit from that era and it is a highly collectable kit thanks to the unusual orange and yellow kit colours.

Let’s hope somebody get hold of the one-of-a-kind Partick Thistle away kit after its TV appearance.