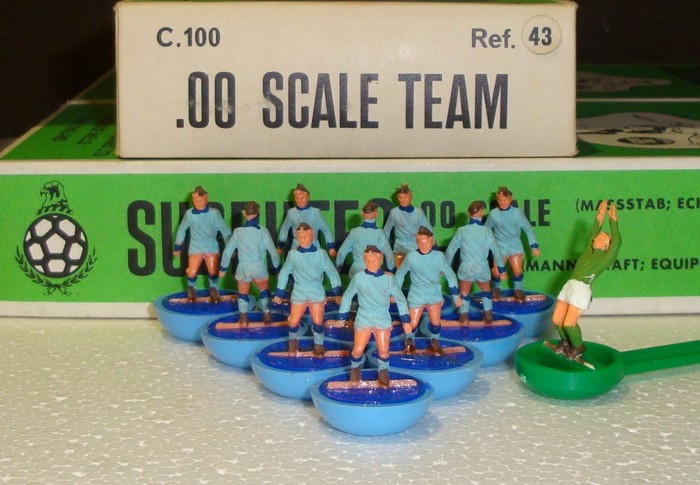 Football is all about emotion.

Away from the Twitter spats, the red-faced radio phone in wind-up merchants and the endless transfer tittle-tattle it can be easy to forget that the real joy to be found in the beautiful game is that match-day experience.

There isn’t a football fan alive who doesn’t remember the first time they pushed through the turnstiles and took in the pitch, the stands and the crowds for their first game. Nobody ever forgets the first time they fell in love with the team in front of them.

For some it is a traditional passed down through families, for others a top team on TV started a lifelong love affair. For others there is a slightly more unconventional reason for following a team and sharing in the various highs and lows of football fanship.

Those people decided to choose a team to follow because of one thing – Subbuteo. And it is nowhere near as unusual as you may think.

Paulo Di Canio famously suggested the reason he pulled on Celtic’s famous hoops was because he loved the Subbuteo team as a child.

Meanwhile, Gigi Buffon is a fan of Borussia Monchengladbach because of the game – and we’re sure he has a team in his vast Subbuteo collection because of his love of the German side.

So when we asked readers of Subbuteo.Online to share their love of teams because of the Subbuteo team we were blown away by the answers.

Italian Subbuteo fan @ivomirko is one of our favourite Subbuteo Tweeters. Full of knowledge of the game and football in Italy, he revealed he had a soft spot for non other than homeless East Midlands side Coventry and it’s all because of the famous Talbot home shirts. With some stunning Subbuteo kits and legends like Steve Ogrizovic and Dion Dublin, we really cannot blame him.

Coventry.
I'm not actually a fan, but I've got a sympathy for them pic.twitter.com/D3qSgm9DOU

With Leeds, Bradford, Huddersfield and the Sheffield sides on your doorstep it should be easy to choose a club in Yorkshire. Geoff has taken the bold decision to follow the beautiful green and yellow kit of the Canaries and adopted Norwich as his side thanks to Subbuteo.

Yep! I bought no. 28 in 1972 and have been a Norwich City fan ever since… and I'm a born and bread Yorkshireman! My son was then introduced to 'my team' in the late 80s. I recently reacquainted myself with Subbuteo. pic.twitter.com/5GBUCR5yWn

And that wasn’t the only Norwich fan. The speckled kit is one of my favourites and it seems others were enthralled too.

Norwich city for me. No affiliation with them whatsoever but the early 90s kit made it unique enough to grab my attention. pic.twitter.com/RpDwH7Olal

They may be twice European Champions and boasted one of the greatest managers of all time but Nottingham Forest are still an unusual choice for a fan from Uruguay.

A Brentford fan who pitted the side against some eclectic sides

The London side haven’t had much of a chance to secure European football but Gary ensured his Subbuteo side travelled to such exotic sides as Ujpest Dosza. No, me neither.

I supported @BrentfordFC anyway and had a Subbuteo team that were red and white stripes so clearly they became The Bees! The Subbuteo lads were unbeaten in Europe through my childhood against some wonderfully named foreign sides like Ujpest Dozsa and Dukla Prague!

It seems Buffon is not the only one to choose the German side as the Subbuteo team of choice. I hope he kept the side, as it’s worth a small fortune now.

Always had a soft spot for Borussia Moenchengladbach as that was the first Subbuteo team I ever owned, given to me by my cousin who was given it at a tournament.. I’d never even heard of them.. I was 11..

This lovely story from Adrian was the inspiration for asking the question. A lovely tale and a nice kit colour to choose.

Subbuteo has always been a great way to find obscure foreign teams and it seems Cagliari have one more fan because of the game.

Cagliari becauze of the strange (at the time) combination of red and black. I bought it in 1972… Along with Norwich City and Crystal Palace… I always liked colourful teams…