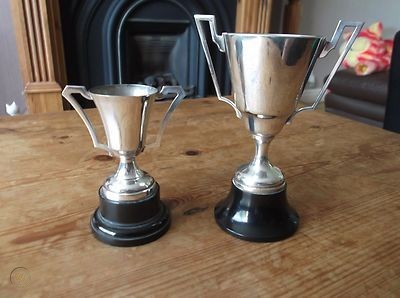 The Subbuteo trophies that are rarer than the League Cup

The Subbuteo League Cup is widely regarded as the rarest and most valuable of all of the trophies the brand ever produced.

The three-handled trophy is named as the Holy Grail for many collectors and recent eBay items have fetched upwards of £150 in the wake of fierce bidding from collectors.

It may be rarer than the FA Cup, European Competitions Cup, European Cup, Jules Rimet and modern World Cup but it is not actually the rarest Subbuteo cup on the market – and the rarest trophy Subbuteo ever made is often not even tagged as such when it appears on eBay.

Many job lots and box sets feature cups that were not made by Subbuteo. These are often from rival table football games or are those bought by players as a makeshift Subbuteo-size trophy from elsewhere.

However, in the late 1950s Subbuteo did sell three more unusual trophies and they are now incredibly rare. The largest is the biggest trophy Subbuteo ever produced, standing around 23cm tall, while the smallest is a similar size to other Subbuteo trophies.

The EPNS Cups were sold by Subbuteo in the 1958 catalogue. Named after the process used to make them – electric plated nickel silver – the trophies feature angular handles and were never based on a real trophy.

They are very difficult to find, with many other small trophies being labelled as the cups on auction sites without any proof. The only evidence is the 1979 catalogue and that shows three silver trophies with the identifiable handles and designs.

Interestingly, they were never actually made to be sold. Peter Adolph used to send them to clubs to act as tournament trophies and originally there may have been four versions of the cups. Subbuteo would send them to anybody who wrote a letter asking for a trophy to use in their club, meaning they found their way into Subbuteo boxes through the years without ever actually representing a real-life trophy.

The process continued for several years until the late 1970s. By 1979 Subbuteo clearly had stock left over and they appeared in the Subbuteo catalogue for the first time in nearly 20 years. These trophies were given the labels C162 for the largest, C163 for the medium and C164 for the smallest, and they sold out very quickly.

Subbuteo did not make any more after this, which means the EPNS Cups were probably produced or bought in bulk in the late 50s and then given away or sold until stock ran out in 1979.

If there was a fourth cup before 1958 then that would be the rarest Subbuteo trophy in the world – although it would be difficult to identify. As it is the confirmed three are incredibly rare and probably worth a high price to collectors.

In fact, it’s impossible to know how much they would sell for if a full set came on the market today. Listings from over a decade ago has sellers asking for hundreds of pounds and if a collection did appear, it would certainly be worth more than the League Cup.

So next time you are searching through a job lot keep an eye out for the three forgotten Subbuteo trophies – they could be rarer than the Holy Grail itself.