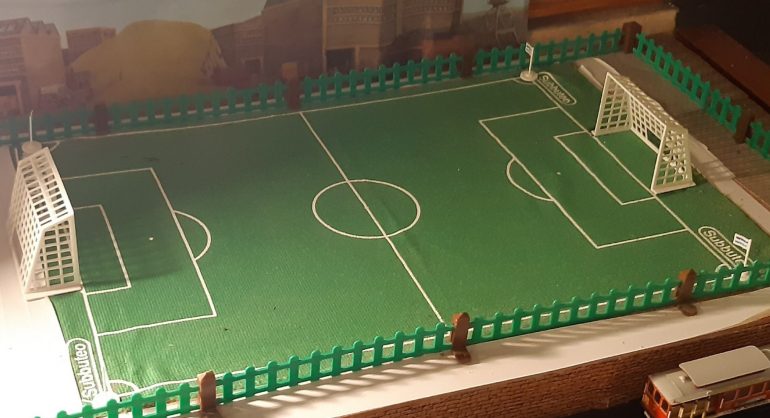 If you are a Subbuteo stadium builder you will have heard of Project Subbuteo on Twitter.

The account is covering a simply incredible stadium build featuring multiple stadiums, a model village-style setup and even a working train track.

Apart from the frankly ridiculous amount of Subbuteo pitches, stands and accessories throughout the attic, the account also gives some pretty useful tips to other stadium builders – including one that we have never seen before.

Most major new stadium complexes in the world have associated training pitches nearby. Think of the Etihad complex and the mini Camp Nou. Now there is a way to do a Subbuteo version.

Project Subbuteo has cleverly used the Subbuteo Milk Chocolate Edition set, currently on eBay for around £15, to create a neat training ground complete with mini pitch and smaller training goals.

He has surrounded it with classic Subbuteo fences, added some corner flags and the result is a perfect small pitch for training and five-aside that can sit next to a full size stadium.

According to Peter Upton’s Subbuteo site, the chocolate set was sold in Boots in the late 1990s and featured chocolate balls and a trophy, as well as unsold players.

He says: “The set contains a very small pitch with cheap goals, plus four outfield players, two goalies, and a ball. Plus 28 chocolate footballs, one chocolate cup, and 2 chocolate medals. The instructions doubled as a score sheet, and the idea was to eat a chocolate ball every time you scored. The winner of the game ate a medal or the cup.

“The players were two blue and two red, which I’m guessing were taken randomly from unsold Hasbro teams. My red players are AC Milan, and the blues are Arsenal away. My goalkeepers have dark skin and grey shirts. Obviously these sets sold well because a similar version was produced in 1998.”

It is a superb idea and the latest in a string of space-saving solutions Subbuteo fans have generated to fit into small rooms and table tops.

Earlier this year we saw the first ever Subbuteo futsal stadium – a mini blue pitch surrounded by classic grandstands for a mini stadium that can fit on the smallest surface.