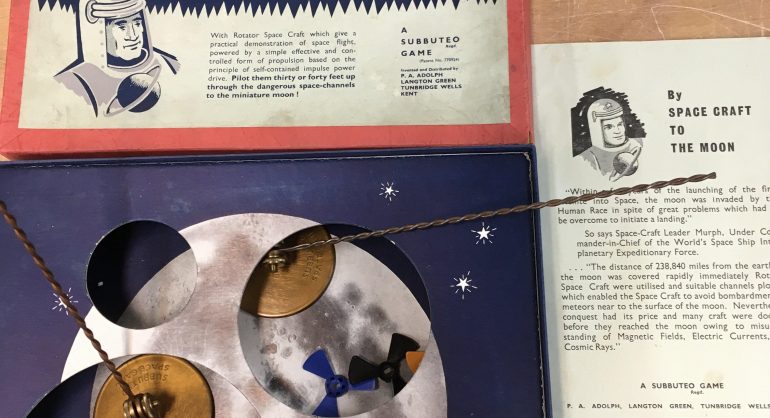 A Subbuteo game that could be one of the rarest items ever produced by the brand is set to go up for auction this month.

The bizarre Subbuteo By Spacecraft to the Moon was launched in the 1950s as a companion game to Subbuteo football as the world was gripped by the space race.

It was made in small numbers and only sold for a short period of time but that means it is something of a rarity for collectors. However, a version sold at auction this year for £3,000 and it seems to have flushed another seller out.

The Subbuteo by Spacecraft to the Moon game has been listed on online auction site The Saleroom with a starting price of £480 and is set to go under the hammer at the end of June.

Notable Subbuteo historian Peter Upton explains the game on his website: “The final Peter Adolph Subbuteo games of the 1950s cashed in on the space race. Journey into Space and By Spacecraft to the Moon. The first of these was played using a model of Saturn made of a plastic ring and a balloon, which you fitted to the picture rail.

“You then launched your bladed flying saucers at Saturn by propelling them along twisted wire ‘launchers’ with a length of plastic tubing – with the aim of landing them on Saturn’s rings. By Spacecraft to the Moon used the same saucers, but simply used the box as the moon’s surface.”

The game worked by using a launcher to fire the flying saucers into the air with the hope of landing it on the ‘moon’ disk. The saucers could fly 40ft in the air according to the instructions.

The box set on sale this month looks in good condition – and any prospective buyers are sure to need deep pockets to secure the rare item.