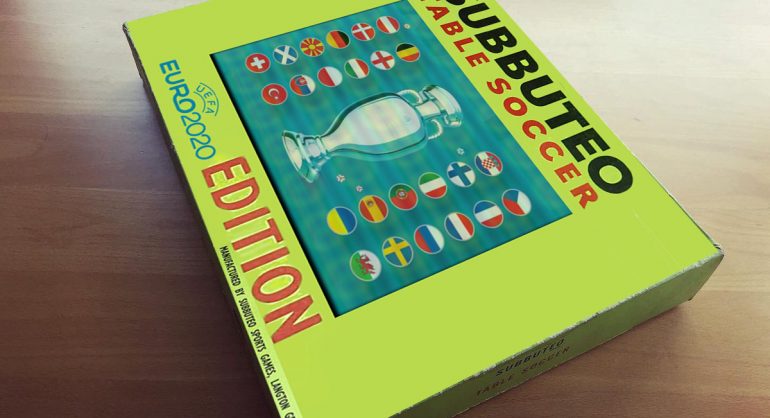 What would a Euro 2020 Subbuteo box set look like?

The group stages of the Euro 2020 championships – which actually take place in 2021 – have been confirmed.

England, Scotland and Wales have all made it through for the historic tournament, while Hungary, Finland and North Macedonia are some of the other somewhat surprise qualifiers.

The tournament is taking place a year late due to the coronavirus pandemic and matches will be played all across Europe, with the final taking place at Wembley stadium in London.

I know what you are all thinking. Will Subbuteo be bringing out a box set to coincide with the tournament like it did in the old days? After all, the Munich 74 and Italia 90 box sets are massively popular with collectors.

The answer is no. Subbuteo launched an England box set in 2020 and, while it did launch a World Cup set in 2018, there are likely no plans for a dedicated Euro 2020 set.

However, that doesn’t mean I can’t crack out the (very poor) photoshop skills, disappear into dreamland for half an hour and imagine a money-no-object, best case scenario box set that could be a winner when it comes to the big tournament.

If I was suddenly promoted to CEO of a new-look Subbuteo brand powered by Jeff Bezos’ billions the first thing I would do it create a premium box based on a similar design to the famous green box sets of the 1960s and 1970s.

This means bringing back the Subbuteo font. Making it green (I’m looking at you, 1990s USA and Euro 96 box sets) and giving it a proper retro look so that it looks incredible when displayed.

I quite like our planet. It gave us Goodison Park, Subbuteo and Parma Violets. It’s given us nice things so I would ditch the plastic bags and reintroduce biodegradable cardboard (or an eco-friendly substitute) inserts.

These should be cheap to manufacturer and look a lot like some of the best-presented Subbuteo boxes of all time, all while saving the planet.

Think something along these lines:

What about the teams?

Don’t worry, I’ve thought this through.

There will be three editions here in the UK with a ‘main’ team of England, Scotland or Wales respectively. The other two teams included in the set – I’m going with three in each – will be randomly selected from all of the Euro 2020 participants.

But where are these teams coming from?

Well, here is where I’d pick up the phone to Italy. Heavyweight players are no longer made but they would easily be the most popular option in a Euro 2020 box set. The closest we have is the surprisingly beautiful Subbuteo La Leggenda Platinum Edition range, sold in Italy as a part-work over the past few years.

The sets are based on heavyweights but with some absolutely beautiful player and kits details. They are well-presented and are some of the best new Subbuteo around.

I’d bulk buy a load of Platinum Edition teams and use these. Just look at them.

I would also buy more teams than you need because you can sell the rest separately – I’m sure people would want to complete a collection here.

What else is in the box?

You are going to need a pitch and a ball. These are simple. The pitches in the new Subbuteo sets are very good and they would easily stand up well in this new Euro 2020 set.

The balls are also easy, but not cheap. Decals are the way forward here. Clever Subbuteo makers are already creating many of the balls used in the modern game and they usually look amazing. They cost around £10 each but Subbuteo could use the power of bulk buying here.

In fact, they’ve already been made by the wonderful kits-models.gr.

The set is a premium set, so I’m not having the modern goals anywhere near it. We’re going to need some Wembley-style goals.

The talented Peppe Cafaro on Facebook has built old-style Wembley goals and they look amazing. However, if hundreds of orders are too much for a single person we can always use some nice Astrobase goals in the set.

Give me more of your lovely Subbuteo set dream

How about a replica trophy? £7.28 on Amazon for an official product. Done.

I’d also add a couple of dugouts and managers – you can 3D print these or get more premium versions ready-made from Subbuteostadium.com.

You can throw in some classic fencing with some modern sponsors, a 3D-printed scoreboard and your set is complete.

And that is it. Stick all of that in a box and get going.

I’ve thought about this a lot more than is healthy and I think a box set like this would sell quickly and in huge numbers. It could lead to further sales of teams and re-align the brand as a premium product.

Bulk buying could lower the cost and if it could be pitched at £40 with a limited edition run it could be a winner.

Anybody got a few hundred thousand pounds to lend me?