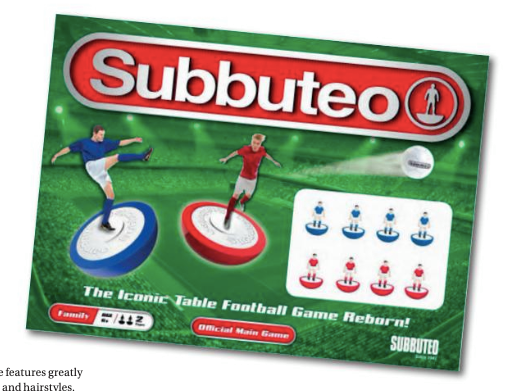 That is the message coming from the UK license holder of the table-top football game after confirming a major relaunch for 2020.

Paul Lamond holds the UK license for Subbuteo, which is ultimately owned by Hasbro. After Paul Lamond announced a merger with University Games it has now confirmed a relaunch of Subbuteo with the biggest marketing campaign for 40 years.

The relaunch will also include social media and TV commercials with a focus on sales in the run up to Christmas.

A statement on the website says: “University Games will present one of their largest marketing campaign in forty years to relaunch Subbuteo, a classic football game loved by generations of UK families. The campaign will feature an exciting TV commercial that can be seen at Toy Fair.  The new commercial will be used across social channels and aired on TV in line with key footballing events and the Christmas build-up in 2020.”

The London Toy Fair takes place on 21 January and will be the first glimpse at new Subbuteo sets and the direction the game with take in future.

The new sets could include a new Euro 2020 box set, with the tournament one of the biggest football events of the year.

The image of a new box set shows traditional red and blue teams with more detailed hairstyles and different coloured boots in keeping with modern football.

Fans will be hoping there is a move away from the poor quality box sets currently being produced and a move back towards high quality boxes using the older reference number system.

Hasbro has struggled to revive Subbuteo and the previous launch in stores such as Hamleys arrived with big fanfare. However, in 2018 the final Subbuteo sets disappeared from the shelves of the toy store leaving only online sellers still stocking the game.

The new announcement is major news for Subbuteo fans and new players and there will be a lot of excitement around the big reveal in a little over a week.