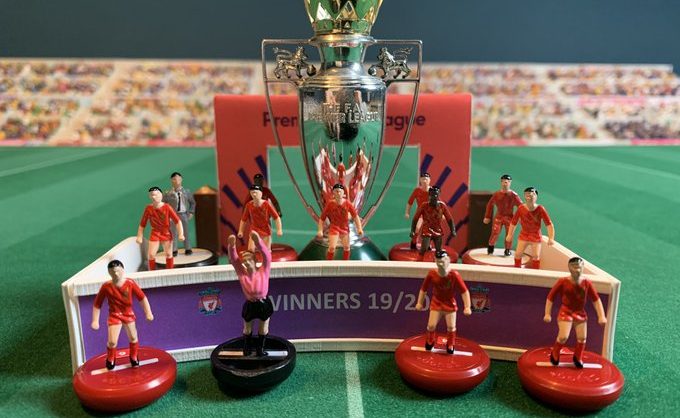 The Premier League has been completed using Subbuteo

PFA head Gordon Taylor’s latest ridiculous attempt to justify his outrageous salary is to bring back the Premier League with shorter games.

As the football circus rumbles on fans of the game have responded en masse with a single suggestion – why not play the games in Subbuteo instead?

There have been tens of people making the joke on Twitter as an attempt to highlight the absurdity of restarting a league as the UK passes 30,000 deaths.

However, here at Subbuteo Online we completely agree Subbuteo is the answer. In fact, one player has already played out the Premier League in full and today we start the campaign to replace the half-finished table with the Subbuteo Premier League.

George Wysocki, the player behind the Subbuteo Premier League Twitter account, has played out the full season and Liverpool fans will be pleased to know they did in fact lift the title in Subbuteo form.

Elsewhere, there were surprise Champions League qualifiers and a last day relegation thriller. It’s almost better than the real thing.

Here is George telling us how the season played out.

The start of any of my solo Premier League seasons begins with the painstaking task of trying to guess and emulate each club’s starting XI. The relatively easy part is choosing the goalkeeper, as most if not all clubs have a number one choice. Every team has the obvious choices – Liverpool’s front three and Man City’s star players in a star studied squad – De Bruyne, Aguero, Sterling. I also try to take in to account the number of black players you get with the Zeugo teams – I play with profibases from the Zeugo range.

I still can’t decide whether it made things easier, or harder, that some of the new teams I bought for this season – Wolves, Crystal Palace, Arsenal amongst others, came with all white-skinned players. The way keep track of each player is a little A6 book with the squad lists in, each player matching the squad number affixed to their base. The A6 book is sacred, as that is where the tally for the goalscorers go after each match.

Anyway, enough of the waffling intro, you want to know what happened on the baize, right? Thought so. My previous full season (2017/18) saw Man City win the title ahead of rivals Man Utd. Therefore, it was only right that the defending champions would kick off the new season, as they edged out West Ham 2-1. Everton’s Moise Kean was the star of the opening weekend with a hat trick in a 4-2 win at Palace which saw The Toffees top the early season table from Merseyside rivals Liverpool. Notable August mentions should go to Watford Ben Foster, Sheffield Utd’s Dean Henderson and Liverpool’s Alisson Becker, all of whom did not concede a goal in the opening month of the season. Liverpool and Sheffield Utd headed the table with 100% records as summer quickly turned to Autumn.

Liverpool won their opening five league matches to head the table from Arsenal, who were three points behind after defeat at Anfield. Champions Man City were unbeaten but two draws had seen them slip to four points off the pace. At the bottom, Crystal Palace and Newcastle were the bottom two, a stat which would remain for a long time to come through the winter months. Sheffield Utd and Everton’s good early form had taken a hit as they slipped down the table, whilst Wolves, Man Utd and Chelsea all climbed to healthier league positions.

Leicester, Crystal Palace and Newcastle all remained winless in the first three months of the season. Wolves and Liverpool remained the only unbeaten sides in a month which saw Man Utd rise to second in the table and hot on the heels of their fierce rivals from down East Lancs Road ahead of their clash in November. Good early season form from Watford saw them in a surprising 5th place, above the likes of Man City, Chelsea and Tottenham. Sheffield Utd were on a six match losing streak having won their first three, and shipped three goals in as many matches against Liverpool, Watford and Arsenal. The biggest win margin of the season arrived in October, with Chelsea scoring with all but one of their 8 shots at Southampton, romping to a 7-1 victory – Tammy Abraham scoring four times.

Remember that key clash between Man Utd and Liverpool I mentioned earlier? Well, it arrived with Liverpool three points clear of United and an unbeaten record to preserve. Pogba and Sanchez had other ideas and both found the net as United moved level with Liverpool at the top, both with 22 points from 9 games at the time. However, by the end of the month, Liverpool would be six points clear of Man Utd, who slipped below Arsenal to 3rd, after consecutive defeats away to Norwich and Bournemouth. Man City were drawing too many matches to keep the pace at the top, whilst Wolves were looking a good bet to break in to the top four with big names stuttering – Tottenham were in the bottom half. Newcastle remained without a win, six points from safety with 11 matches played.

Christmas always has an effect on how many games can be played during the festive period. Whilst the normal season seems to be playing every other day, it’s slightly different here with family commitments. That didn’t stop the season ticking on, though, just a little more slowly than the actual one. Liverpool kept on winning. Arguably, this the month that made them clear title favourites.

After losing to Man Utd, they won an unprecedented nine consecutive games to move 11 clear of Man Utd, who had climbed back to second. Too many defeats for Arsenal meant they were out of a title challenge, even before the half way stage.

Newcastle finally won, 2-0 at home to Southampton, but as certain as Liverpool looked that they would go on to win the title, it was looking bleak for the Toon Army who were nine points adrift of safety. Champions Man City found themselves 6th, a staggering 18 points off leaders Liverpool. Surely the defence of their crown was over?

Tottenham were the form team at the turn of the year, with only two dropped points in five games meaning they climbed to 6th and well within striking distance of a Champions League place.

Man Utd were staying as close as they could to Liverpool, whose winning run was ended by struggling Leicester who were in the relegation zone. Sheffield Utd and Everton were looking like title contenders in August, but both were now hovering dangerously close to the bottom three with the Blades starting the new year below the dreaded dotted line.

Apparently, some virus thingy was going to stop football? All the medical advice pointed towards plastic figures couldn’t contract or spread the virus, so the season here ploughed on. Man City had put a winning run of their own together to climb to third, but they were still a huge way behind the leaders who re-found their winning form.

Man Utd were there too, but an 11-point gap looked just too much to overturn even with just under half of the season to play. Man Utd missed their chance at Anfield, a 1-1 draw not a bad result, but an opportunity missed to cut the gap further. Everton dropped in to the bottom three, whilst indifferent form for Watford and Bournemouth saw them nervously looking over their shoulders. Newcastle remained bottom, Palace 19th. It had been that way for months.

For those who don’t know me, I work in education. The virus closed schools in mid-March, and that meant one thing, and one thing only. Matches were going to get played. A battle was ensuing for the Champions League places. Eight points separated Wolves in 7th and Man Utd in 2nd at the start of the month. Not only that, Liverpool’s form had suffered massively and they hadn’t won for six matches.

That allowed Man Utd to cut the gap at the top to five points. Was the title race back on? Dpesite Liverpool’s dip, United failed to fully capitalise as they drew five consecutive games whilst Liverpool were drawing and losing themselves. Aston Villa and Leicester were now struggling, too. Four successive defeats seeing both plummet down the standings. Crystal Palace decided to start playing, and won four of six matches to climb to 15th.

Newcastle went on a superb run to suddenly thrust their safety chances back in to the mix. Win after win saw them finally climb off bottom to 17th come the end of April. Villa, Bournemouth and Leicester looked to be the doomed three. Every time someone won at the bottom to seemingly get out of danger, everyone around them seemed to win too to keep the bottom as tight as ever.

Palace and West Ham had put good runs together to now be dreaming of 7th and a berth in the Europa League. Southampton and Brighton were milling around in mid table, better that than being further down the bottom. Good form for Everton saw them climb away from relegation threat, but despite two wins for Norwich, three defeats meant they were still within reach of those below them.

Many of you might have already seen on twitter how the final few weeks panned out. In a nutshell, Norwich didn’t win another game and ended up bottom, even though a win at Man City on the final day would have kept them up at the expense of Newcastle.

Newcastle performed the great escape, Matt Ritchie and Allan Saint-Maximin the main players helping them stay up. Despair for Bournemouth and Aston Villa too, who both left wins too late in the season to survive. Villa’s defence costing them in the end, going to on goal difference. Liverpool wrapped up the title when Mane’s hat trick beat Chelsea 3-0 at Anfield. Watford escaped despite worrying end of season form, Man City, Wolves and Man Utd earning Champions League places. Three London clubs, Spurs, Arsenal and Chelsea, all claiming the Europa League spots.