Last year we wrote about Subbuteo’s ‘ghost teams’ – the twelve Subbuteo teams that were planned to represent the Major Indoor Soccer League (MISL) in the US during the 1980s.

The teams were never actually created and the league folded, leaving 12 Subbuteo reference numbers that were never actually sold in shops. That means fans of the New York Arrows, New Jersey Rockets, Buffalo Stallions and others would never see their teams recreated in Subbuteo.

However at least one of the teams was made and is now probably one of the rarest Subbuteo sets of all time.

Subbuteo seller SubbuteoWorld has listed a lightweight Subbuteo team from the 1980s and claims it is actually a prototype of the missing MISL sides.

The set is a white team with red shorts and red horizontal stripe across the middle of the shirt. Diagonal red lines complete the unusual shirt design. The seller says the prototype was based on early designs for the ghost teams. 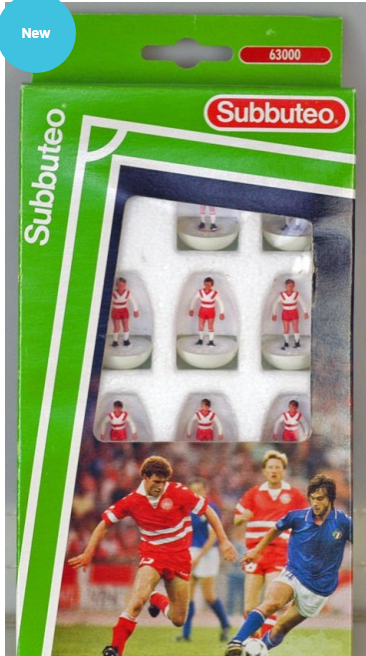 Several prototype teams were created for the MISL project in a variety of colours but most were then reused for other teams once the project was dropped. Other colours including black, orange, blue, yellow, light blue, navy blue, green and maroon were all used on the early prototypes but the teams were never included in catalogues.

The team is in a 1990s Subbuteo box and if it is one of the missing 12 teams it could be the rarest lightweight Subbuteo team around. At £99.99 it is not cheap but it could be a one-off team for a collector who wants to shell out for a bit of Subbuteo history.

The box does not have a reference number but the MISL teams were allocated 580 to 592. You can see the team here.