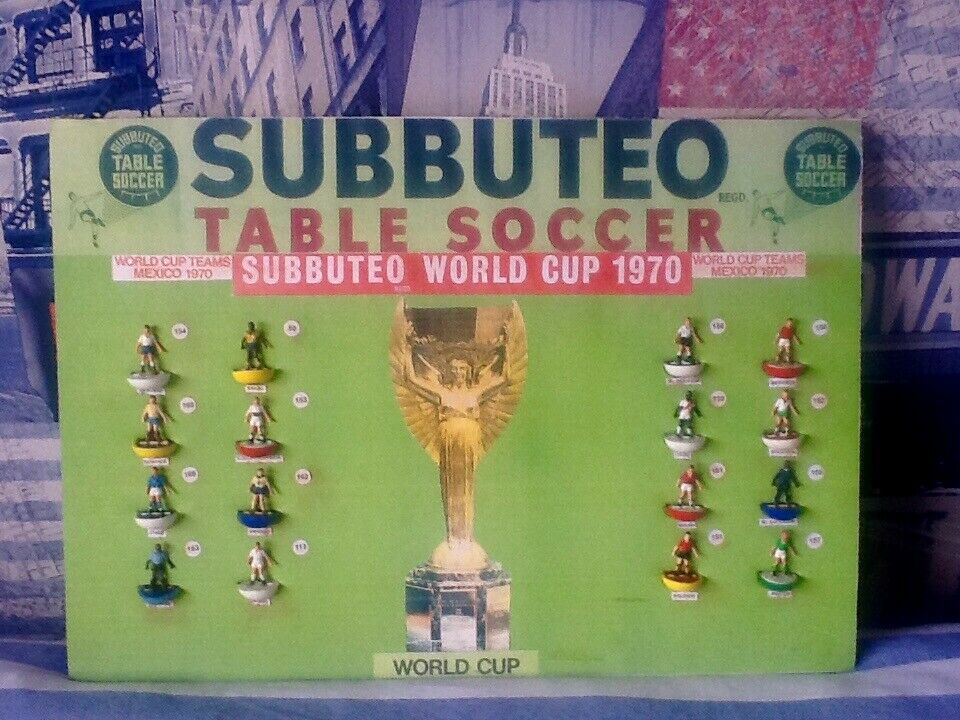 At first glance it looks like a superb piece of Subbuteo history.

Listed as a rare shop display from 1970 featuring players from each team in the 1970 World Cup including the iconic Peru shirt among others.

The seller says it is from a ‘ Barrats Toy Shop’ and adds: “

“All 16 Finalists are displayed with both their Reference Number and their name in their 1970 World Cup Colours.  This is my own display which was given to me by my grandfather and I believe this is the  only  Mexico World Cup 1970 OHW display there is.

“The display is a little faded with age, however, the cardboard is still superbly colourful. It has Subbuteo’s own Fixture Chart printed on the reverse and is really very good for its age.”

However, a closer look reveals a few errors with the production of the display. The most glaring is the use of Russia (reference 161) when the team that actually competed in the tournament was named the Soviet Union. Russia was on;y used as the name for the natioanal team in 1991 after the breakup of the Soviet Union.

Other issues then become apparent. While the likes of Sweden, El Salvador and Peru were sold as part of a 1970 range, they were not actually released under reference numbers until 1973, meaning the use of numbers next to the players would be impossible.

Finally, previous shop displays from the time show that Subbuteo used modified boxes to display players. In displays of the time, Subbuteo historian Peter Upton says: ” Each team was identified by one of the little number circles from the box ends, except for the World Cup teams. these were identified by name, typed onto either the green insert or a white label.”

There are other issues too – the El Salvador players do not have white trim on their sleeves like verified versions of the teams have. While early Subbuteo did have these quirks it just adds to the concern this is not a genuine set.

The set is clearly concerning as 13 bids have been made and the price has rocketed to £160 at the time of writing.

The set first came to our attention when Subbuteo collectors in a Facebook group discussed the issues around it. We have since contacted eBay and the seller for clarification and will update this article when we know more.