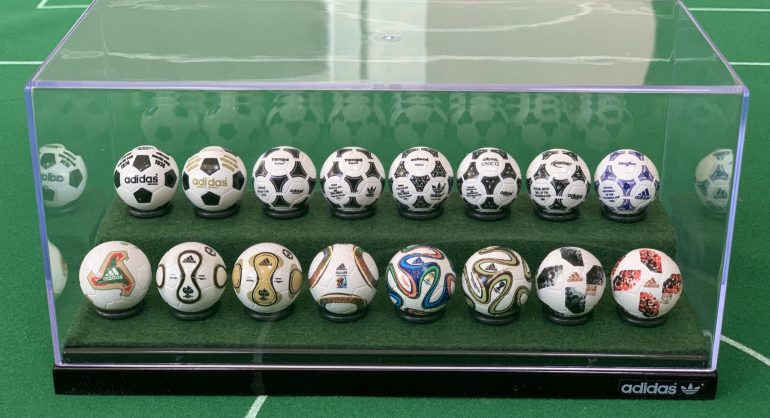 A Subbuteo fan has put together an incredible display of World Cup balls and it’s like nothing we have seen before.

David Thorniley has created a beautiful display of the past 13 World Cup balls including everything from the famous Adidas balls of the 1970s right up to the controversial Jabulani from South Africa 2010.

The display, featuring non official Subbuteo balls with intricate decals to create exact replicas of those used in the tournaments, is topped off by a sleek display case and green baize to complete the professional looking job.

David says: “There are no real tips I can give apart from getting a display case off eBay. I’ve used baize with a self adhesive backing and some hoselock hose pipe o rings to stand the balls on.”

The balls start with the 1970 Adidas Telstar, followed by the Telstar Durlast of 1974.

Then came the Tango, the Tango Espana and the famous Mexican-themed Azteca of 1986.

The Italia 90 Etrusco Unico, the Questra used in USA 94 and the Tricolore for France 98 are next. We then have the Fevernova of 2002 and the Teamgeist used in Germany in 2006. A gold version, the Teamgeist Berlin, was used in the final of the tournament.

The controversial Jabulani was not popular with players in 2010 and the Jo’Bulani used in the final is not included in this display.

Finally, the display features the Brazuca and Brazuca final ball from Brazil in 2014 and the Telstar 18 and Telstar Mechta used in the Russia World Cup – a nice nod to the 1970-ball.

The display is not only attractive, it’s also expensive if you want to do it yourself. Balls like this with proper decals fetch over £10 each on eBay and even doing it yourself is not far off £10 a ball from specialists sites.

That means the superb display is a one-of-a-kind and probably comes at a premium if it was ever sold.

Although why would you ever want to sell such a beautiful design?

Subbuteo ball displays are some of the most attractive things you can do with your collection and the official back catalogue of Adidas Tango balls, Mitre Ultima, Italia 90 and other tournament balls means this can be done using official products at a fraction of the price.