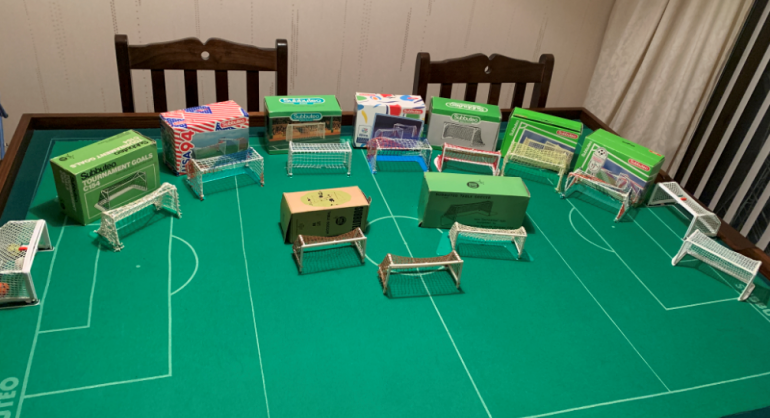 If you want to find out more about Subbuteo goals, we discuss them in the new episode of Netflicks – The Subbuteo Show. You can watch that here.

Subbuteo goals can be tricky.

The goals have changed a lot over the years, from the classic NNs with the back bar across the bottom to the stylish but impractical Mundial goals of the 1980s.

However, Subbuteo goal nets were a source of problems for the company in the 1970s – and even nearly led to layoffs at Subbuteo.

In a little-known fact, they were actually supplied by the same company that made nets for Wimbledon tennis courts. However, a trip to Hull to meet some fishermen and a netting panic meant some Subbuteo staff were forced to look elsewhere.

Former Subbuteo buyer Alan Ellis explained some of the problems with being the company buyer:

“I joined the Company in 1970 and I left the Company in 1981. My last five years with the Company, I was the Company Buyer. Well it was a unique product in as much that there was only one Subbuteo and for instance, see those nets, which were put on the frames by people working at home.

“This company made vast nets and they also made our little nets. We had a lot of dealings with them. At one time I was buying from the Far East because we had a supply problem with this company in Dorset, but mainly because of bad weather.

“If you didn’t have nets you couldn’t produce any games and our production came close to laying people off and the Managing Director at the time said to me, ‘it’s such a critical component Alan, we can’t just have one source, we must get another source’. So I was sourcing all the fishing ports, Hull and all that, and they didn’t have a clue what I was talking about. I said I want tiny little nets that you put on a tiny little goal and unless they knew Subbuteo, they didn’t know what I was talking about. So eventually I sourced it from Taiwan.”

An interesting insight into Subbuteo nets – such a small part of the game but at one time essential for keeping people in work.