We all have our own ideas as to how Subbuteo should look, but its use as a tool is driving its popularity amongst the new generations.

The high profile use of Subbuteo as a tactical and training aid in England’s recent Under 17 World Cup win is a small insight in how coaches and the FA are working with Subbuteo to communicate with their players.

Under 21 coach Aidy Boothroyd has also provided an insight in to how England’s youth teams are being managed at half time in games, including a Subbuteo table in the middle of the dressing room.

Boothroyd said on the FA website: “We’ll have the Subbuteo table there which has become quite popular now because players are quite kinaesthetic and they want to grab hold of things and they want to shift them around. We also find the players will talk more when it’s about them in that particular position.

“We want our players to be empowered and we need to facilitate the discussion in different ways to help our players think and become thinking players.”

FA centres across England now have Subbuteo sets being used for similar reasons.

What it then means for Subbuteo is that their branding and iconic figures are known to kids from a young age, and while it will only be among players of the sport itself, the hope is that this will then spread to their mates, schools and beyond.

That will provide a new market for buying new teams and sets, which continue to be released, despite the current stagnated approach by Paul Lamond Games under the Hasbro license in the UK.

The work with the FA has at least enabled Subbuteo to gain some brand awareness once again, with national newspaper coverage in the Daily Mail, The Sun, local press and a feature on BBC.

That in part goes some way to make up for the slowing down of production of new items, with no English releases since 2014, though there continue to be sets released in Spain, with 12 team licenses, and Italy, where there are currently three team licenses in place. There were previously six English licenses held – for Arsenal, Chelsea, Liverpool, Manchester City, Manchester United and Tottenham – which saw teams released up until 2014, but these have since expired.

A big coup was the UEFA Champions League licence, which has seen a box set and several teams released with the Champions League branding, though there has apparently been issues with a budget that had been set aside to promote Subbuteo across Europe.

The UEFA license lasts until 2020 and the Champions League set (£29.99) is currently the main Subbuteo item on sale in the UK, including a new and improved pitch, stronger players and a new ball. 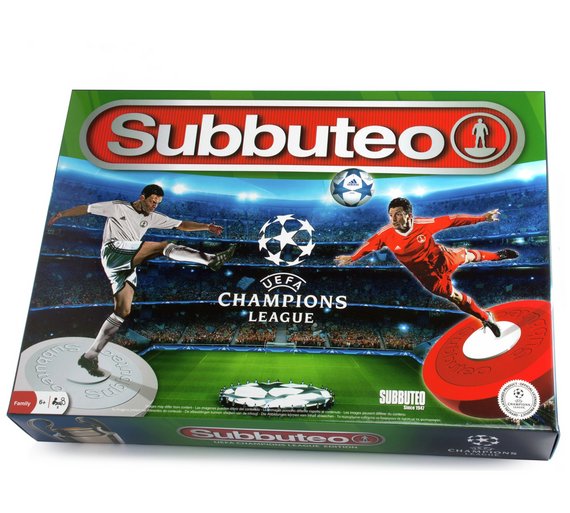 Hopefully it will be on Christmas lists up and down the country!