Sweden’s 1994 World Cup team will be the latest iconic side to be recreated in Subbuteo and this is the first look at the design.

The team is one of Sweden’s greatest ever sides and the Subbuteo team features the classic early 1990s’ Adidas shirt featuring the three-stripe design on either side of the shirt.

The yellow and blue design is one of Sweden’s most recognisable and popular shirts and is synonymous with the nation’s march to third place in the USA World Cup in 1994. That side featured the likes of mercurial midfielder Thomas Brolin, striker Kennet Anderson, Stefan Schwarz and a young Henrik Larsson.

Sweden drew with Cameroon and Brazil and beat Russia in the group stage of the tournament before beating Saudi Arabia 3-1 in the first knockout stage. They then beat Romania on penalties after a thrilling 2-2 draw in the quarter final before going out 1-0 to eventual winners Brazil. 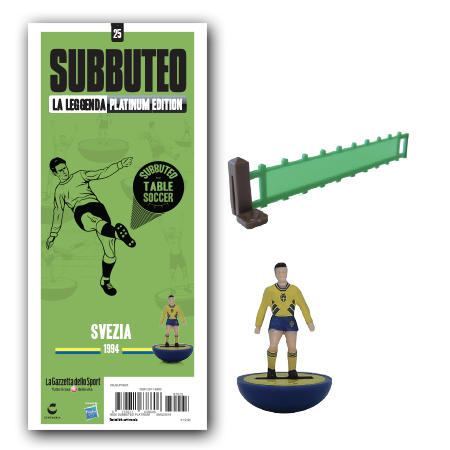 The team has been recreated by Italian company Centuria as part of its new Subbuteo La Leggenda Platinum Edition range. The Platinum Edition is a collection of 80 of the greatest international sides of all time and is being released one team at a time in Italy alongside a newspaper and booklet looking at the team’s tactics and history.

Sweden is the latest new team to be revealed in the range and the 25th in the range. Others include the 1994 Brazil side that defeated Sweden, several classic Italian teams, England’s 2018 and 1966 World Cup teams and new additions such as Nigeria’s famous Nike shirts of 2018 and Ireland’s 1990 World Cup side.

The La Leggenda Platinum range is not on sale in the UK but an eBay seller has set up a store that allows UK buyers to purchase the teams as they are released. Teams cost around £20 including postage.