Salford City has finally got its own Subbuteo team

Salford City have rarely been out of the headlines since the club was taken over by Manchester United’s famous Class of 92.

With Ryan Giggs, Gary and Phil Neville, Paul Scholes, Nicky Butt and billionaire Peter Lim at the helm the club has secured a number of promotions and built new all-seater stands to match the level of football.

Despite flying high in the National League – tier five of the English Football League system – Salford City have been missing one thing that would legitimise them as a football club.

We’re talking, of course, about a Salford City Subbuteo team. 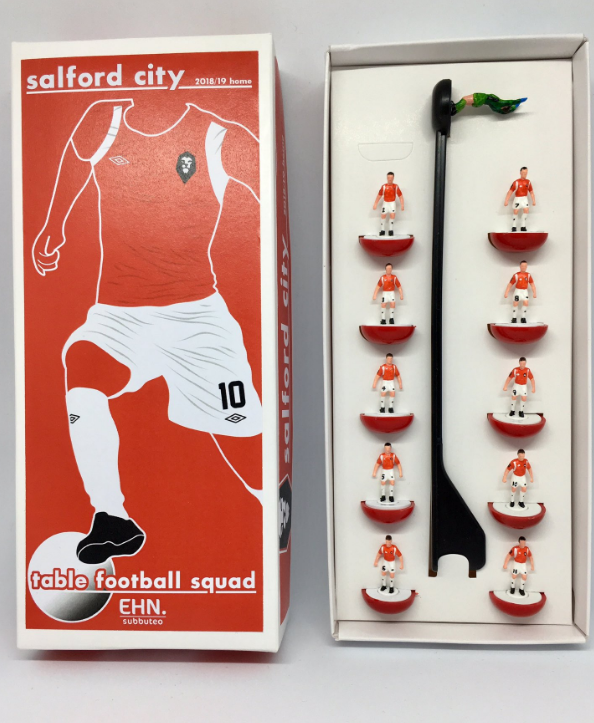 The club was not playing at a high enough level to warrant its own team in the several decades of Subbuteo production but one designer has created a new Salford City 2018/19 team for a fan. The kit is based on the current red strip with white highlights and even comes in a Subbuteo-style box.

The Salford City Subbuteo team is unofficial but with Subbuteo owner Hasbro failing to introduce any new sets in recent years it is down to the thriving amateur community to keep the supply of new Subbuteo teams alive.

The detailed Salford City team is the first ever commission from new Subbuteo artist @TravelEff. She painted the set for a Salford City fan for £15 – making it a one of a kind in the Subbuteo world. For more information about the commissions you can visit the store on https://ehnsubbuteo.bigcartel.com/.

It may not be the real thing, but it is a beautiful one-off set for one of the emerging sides in English football.