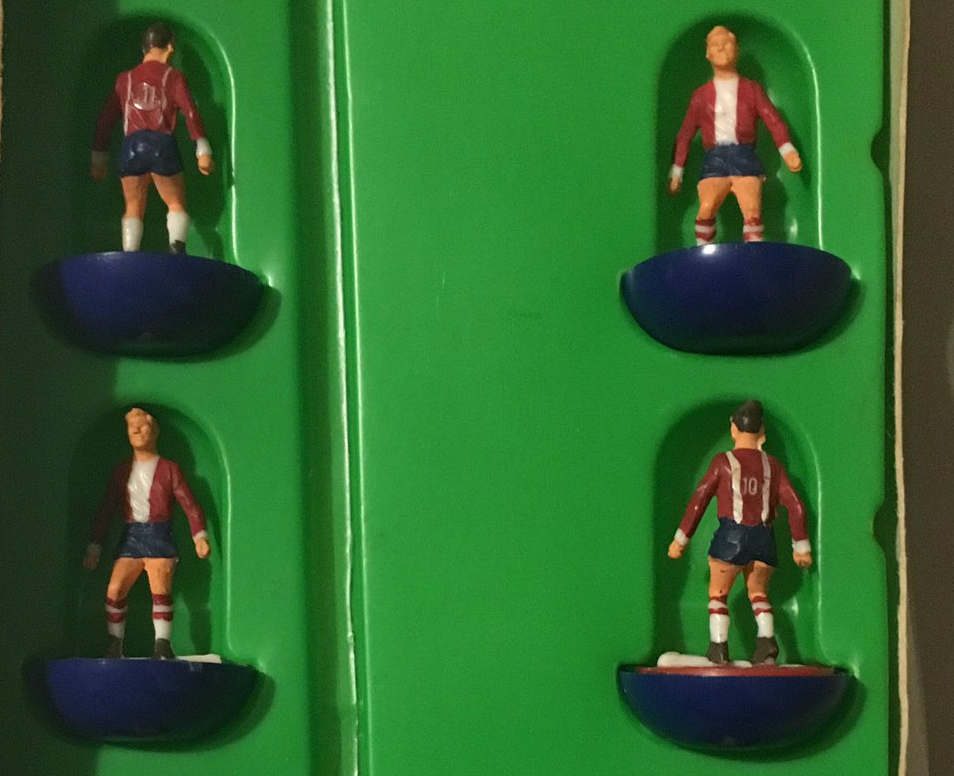 A Subbuteo fan got a nice surprise when he asked Subbuteo.Online to identify a classic team for him.

Steve approached us on Twitter asking about a heavyweight team he had owned for several years and wanted to know a bit more about identity of the side.

After a bit of research on Peter Upton’s site, we found the matching team – and it turns out it is one of the most rare and valuable Subbuteo sets ever created.

The striking red, white and blue kit is that of FK Lyn Oslo, a Norwegian side who now ply their trade in the third tier of football in the Scandinavian country.

One of only 11 Norwegian teams ever created in the pre-1981 heavyweight era of Subbuteo, Lyn Oslo is one of the rarest teams in Subbuteo and could fetch over £500 if it went on sale.

That figure is an estimate since there is no record of one being sold on eBay and even SubbuteoWorld does not have the rare side listed for sale.

Given rare heavyweight sides can reach prices of over £600 on some eBay auctions, the value could be even higher than we predict if it was ever sold.

The reason it is so valuable is because Norwegian sides were never made in great numbers and very few were sold in the UK. That, coupled with the distinctive kit and relative obscurity of the club now means it will be highly prized by collectors.

It turns out Steve was very savvy years ago to get his hands on the side.

He says: “It was a swap a very very long time ago. I reckon about 30-40 years ago I swapped it with a friend – possibly for a France team.

“I always liked it because it was unusual.”

Unfortunately the set is actually in the France box and does have a missing goalkeeper and one glued player.

That may impact the value but it still remains an incredibly rare set and one that we have never seen until Steve shared the picture with us.

But finally, who are FK Lyn Oslo? We reached out the club to talk Subbuteo and hopefully that will happen soon. In the meantime here’s a quick history.

FK Lyn Oslo are actually one of Norway’s oldest clubs. Their golden period came in the 1960s – perfect timing to be spotted by Subbuteo – with titles in 1964 and 1968, as well as a couple of cup wins.

They even reached a European Cup quarter final in 1969, losing to Barcelona. In the 1970s they competed in the UEFA Cup, where they faced Leeds United and
Tottenham Hotspur. Both ended in heavy defeats.

They are perhaps best known for being at the centre of Chelsea and Manchester United’s dispute over John Obi Mikel. Having signed him for £16m, Chelsea then claimed against Lyn to recoup the money after discovering former chief executive Morgan Anderson had forged an employment contract with the club.

The dispute was settled out of court but in 2010 Lyn went bankrupt and dropped to the sixth tier. It has since recovered and is known for its loyal fanbase, Italian-style displays at matches and rivalry with cross-city rivals Valarenga.

It is an interesting club and, if you happen to find the Subbuteo team, a very valuable one for collectors.