When Hasbro took over the Subbuteo brand in the mid-1990s it was already under pressure.

It was a number of years since the game’s heydey in the 1970s and 1980s, where millions of players competed worldwide.

Instead, console gaming was becoming popular and Subbuteo sales were down. According to one seller in Lancashire sales dipped as soon as Hasbro took over – but there was one last flourish for the brand.

It had acquired the rights to produce a Premier League set and all 20 teams in England’s top division were lovingly created in miniature form, alongside six away kits and a Manchester United third strip.

Some of the teams had sponsors for the first time, but all of them had more detailed kits than ever before. And Subbuteo was ready to shout about it.

Originally launched in 1995, the sets were promoted with a new set of print adverts and these were funny and well-designed graphics for the most part.

Subbuteo’s first Premier League advert was a classic. Featuring the grass-green background that became synonymous with the brand’s advertising efforts in 1995 it features the Premier League lion logo on its very own Subbuteo base. 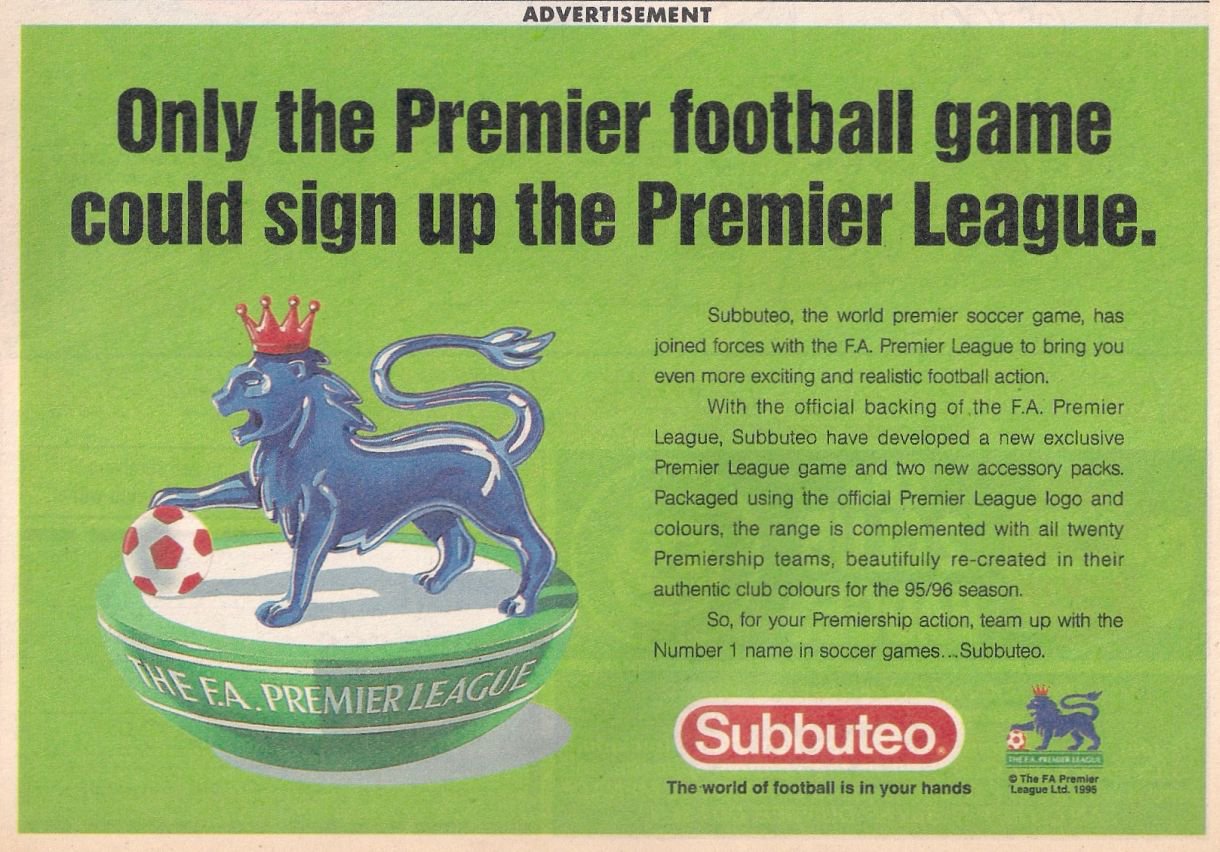 This was never actually a Subbuteo piece although it would have been a nice collectors item if it had been produced. It’s probably one for the 3D printers nowadays.

The next advert features all 20 Premier League teams. The 1995/96 season has some 1990s stalwarts including Coventry, QPR, Sheffield Wednesday and Wimbledon.

Notice the Thistle Hotels sponsor on the Leeds shirt and a couple of other sponsors where Subbuteo had the rights to use them. 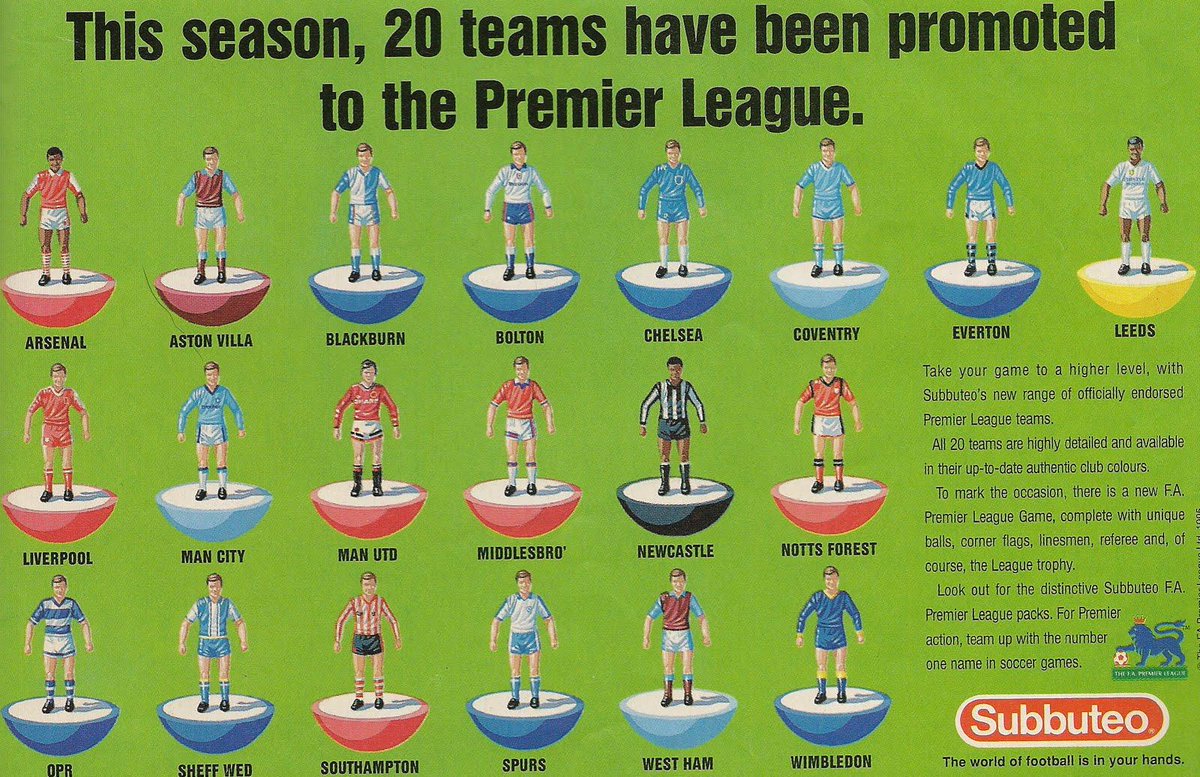 Unfortunately, Subbuteo also made a massive error on this advert. Forest fans will tell you instantly that Notts Forest is not the correct name for the club given city rivals Notts County uses the abbreviation.

A year later Hasbro was back with a funnier, cheekier advert. As the era of Premier League sides regularly changing kits approached it was a growing problem for Hasbro, which had to create new sets every year. 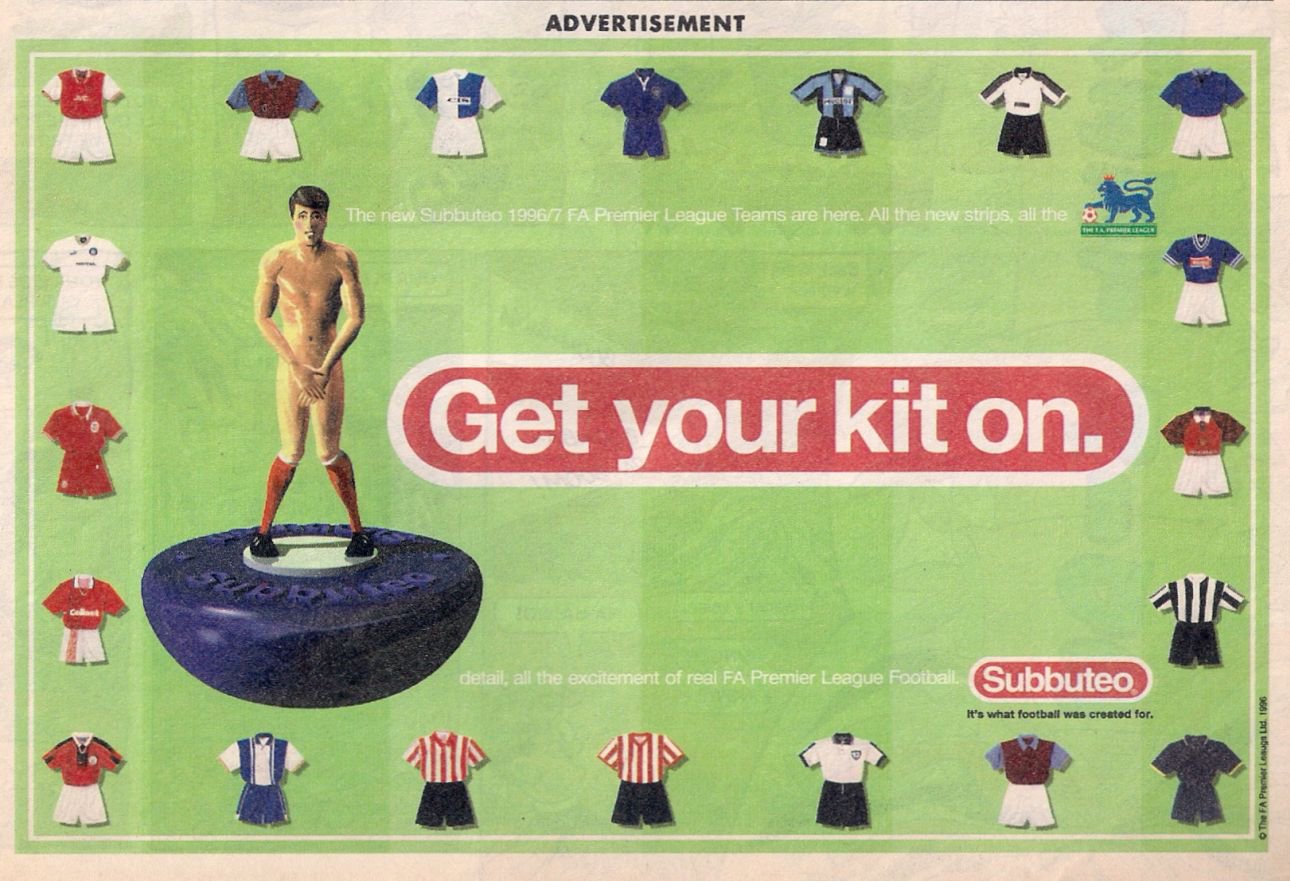 This, along with falling sales, meant production stopped entirely in 1999 but the 1996/97 sets were very high quality with the likes of Derby, Leicester and Sunderland added to the range after promotion.

The cheeky naked Subbuteo player used in the add was maybe a nod to Hasbro’s stuggle to keep up with new kit launches – and was printed several years before Subbuteo streaker accessories hit the headlines in 2002.

The 1990s was not a golden era for Subbuteo but the acquisition of the Premier League license did add a dose of glamour to the game.
While the game itself was in decline the adverts were bold, sometimes funny and, like all good Subbuteo, a little bit rough around the edges.

Salford City has finally got its own Subbuteo team