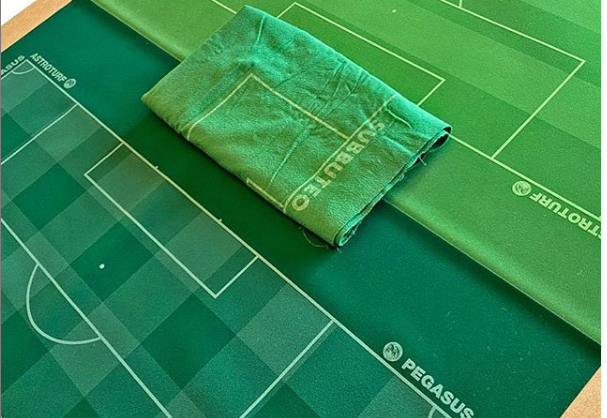 The best Subbuteo pitch in the world has just got a little better.

For years now the Pegasus Astroturf Subbuteo pitches sold by Subbuteo World have been widely regarded as the best playing surface money can buy in the UK.

The pitches, which feature in full size with check and circle patterns, as well as five-a-side box sets, have now been improved for 2020 with a much more realistic feel.

Nostalgia fans will be pleased to see the pitches no longer look as plastic as before. Instead, they have adopted the iconic Subbuteo green of the old baize pitches and the results are pretty impressive.

Shown against the darker green of the older style Pegasus, the changes are obvious. As an aesthetic change it really improves the look and feel of the design and the simple striped version will look superb on tournament tables and in back rooms across the country.

The pitch itself will be available in two weeks and we can expect prices of around £55 for the rubber-backed pitch or £80 for one already fixed to an MDF board. These prices are based on the current Pegasus pitches so they may change slightly.

Subbuteo World, on launching the pitch, said: “The new Pegasus AstroTurf will be here over the next 2 weeks. New more realistic lighter green AstroTurf. The image shows our original pitch (on the left) and the new more realistic green (on the right) which is the same green used by Subbuteo on their original baize pitch.”

But that is not the only bit of new pitch news from the store.

Keith Littler, the man behind the excellent Table Football Monthly Youtube channel, has revealed a half-size practice pitch will also be launched next week.

He says: “Pete Whitehead at Subbuteoworld has received a rather splendid revised prototype of our new Astroturf Practice pitch which I have seen today.

“As well as the usual yellow markings to test your skill and practice your key moves – the square mown pattern acts as a useful guide for measuring length and accuracy of flicks.”

The pitch will be featured on the new episode of Table Football Monthly set to launch this weekend. Keep your eyes peeled!