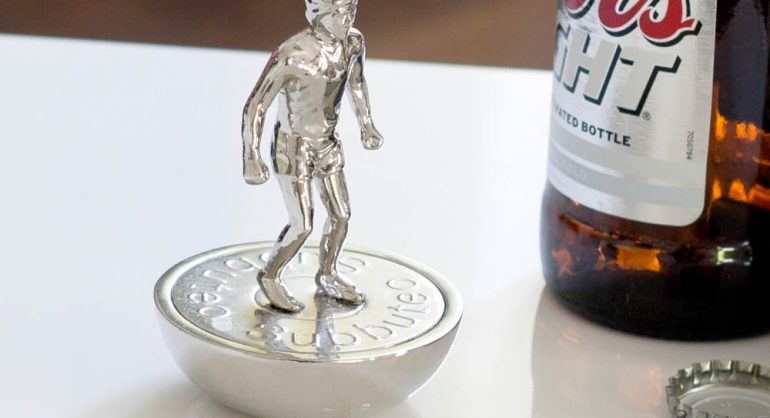 Christmas is coming and for those who are lucky enough to have a Subbuteo lover in their lives it is time to try to find the best Subbuteo present possible.

I get a lot of requests from people asking for present ideas so I thought I’d help out by suggesting some of the best ideas for Subbuteo fans in 2020.

Buying for somebody who loves Subbuteo can be quite tricky. Subbuteo released thousands of teams in thousands of variations and the internet is awash with fakes, repaints and a plethora of options. Collectors often collect a small subset of these items and that can make buying for one tricky.

My advice? Do not buy them actual Subbuteo without a list from the collector themselves. Leave the buying to them as they will know what they are after themselves.

But do not worry, there are still options.

Buying for a non-Subbuteo fan

It may be that you are buying for somebody who played a child but has not really picked it up since. This is usually an old set or a an old favourite team that will be a nice novelty present.

It’s probably easier to get on of the many Subbuteo painters out there to do you a new team in the style of the older teams instead. You can get teams like Liverpool Premier League winners painted to order and they do not cost too much.

You can find painters in the Subbuteo Facebook groups, or get custom made frame sets or custom figures based around your favourite teams at Westwood Table Soccer or Watsie’s Subbuteo Art.

There are actually new Subbuteo sets around. The brand was relaunched in 2020 with an England set and a standard set with blue and red teams. It’s around £35 from the likes of Argos. Collectors generally don’t really like these sets but they are great for introducing kids to the game.

The above options probably won’t cut it with a real fan of Subbuteo. If your loved one has boxes of teams or a stadium setup you might want to avoid actual Subbuteo.

Speaking on behalf of collectors, we do love anything branded with those little plastic men. Most collectors would rather some of the peripheral accessories you can get as a nice stocking filler than a gamble on a box set or a team they may not want.

The actual body wash is a bit of a gimmick but the mug is nice. The picture is a classic Subbuteo image and whether it’s used as a proper mug or a place to store paint brushes, any Subbuteo fan would love this stocking filler.

You can get it here

Zavvi is currently stocking this Subbuteo t-shirt. It’s a nice design with a classic feel and would be popular with anybody who enjoys the table-top game. You can get it here.

Also check out Youbbuteo on RedBubble. He is a Subbuteo video blogger and has a great range of Subbuteo t-shirts that any collector would enjoy. You can see them here.

Menkind stocks this standard novelty Subbuteo bottle opener. Perfect for opening that post-match beer. It’s a simple but effective Christmas gift for somebody who likes a tipple.

Another idea from RedBubble. The throw blanket would look great in any Subbuteo man (or woman) cave. It can be used to cover a pitch, throw over a couch or chair, or hang on the wall.

Subbuteo actually has a streakers set and it’s on sale at respected Subbuteo seller SubbuteoWorld. This makes a fun light-hearted gift and comes in both male and female sets. If that’s not your thing, Subbuteo World also has a nice Subbuteo keyring that makes a nice inexpensive present. You can see them here.