Welcome to our weekly round up of the best Subbuteo job lots on eBay.

Throughout the year we will be updating this list weekly with some of the best bargains, most interesting lots and those that are starting a bidding frenzy thanks to some rare accessories.

As we are in January bidding on Subbuteo eBay items is slow but there are a couple of exciting job lots for sale. We can’t afford them but it is fun to see the price ticking up as people frantically bid on them.

So here we have the first job lots round up 2019 – including one accessory we have been after for years. 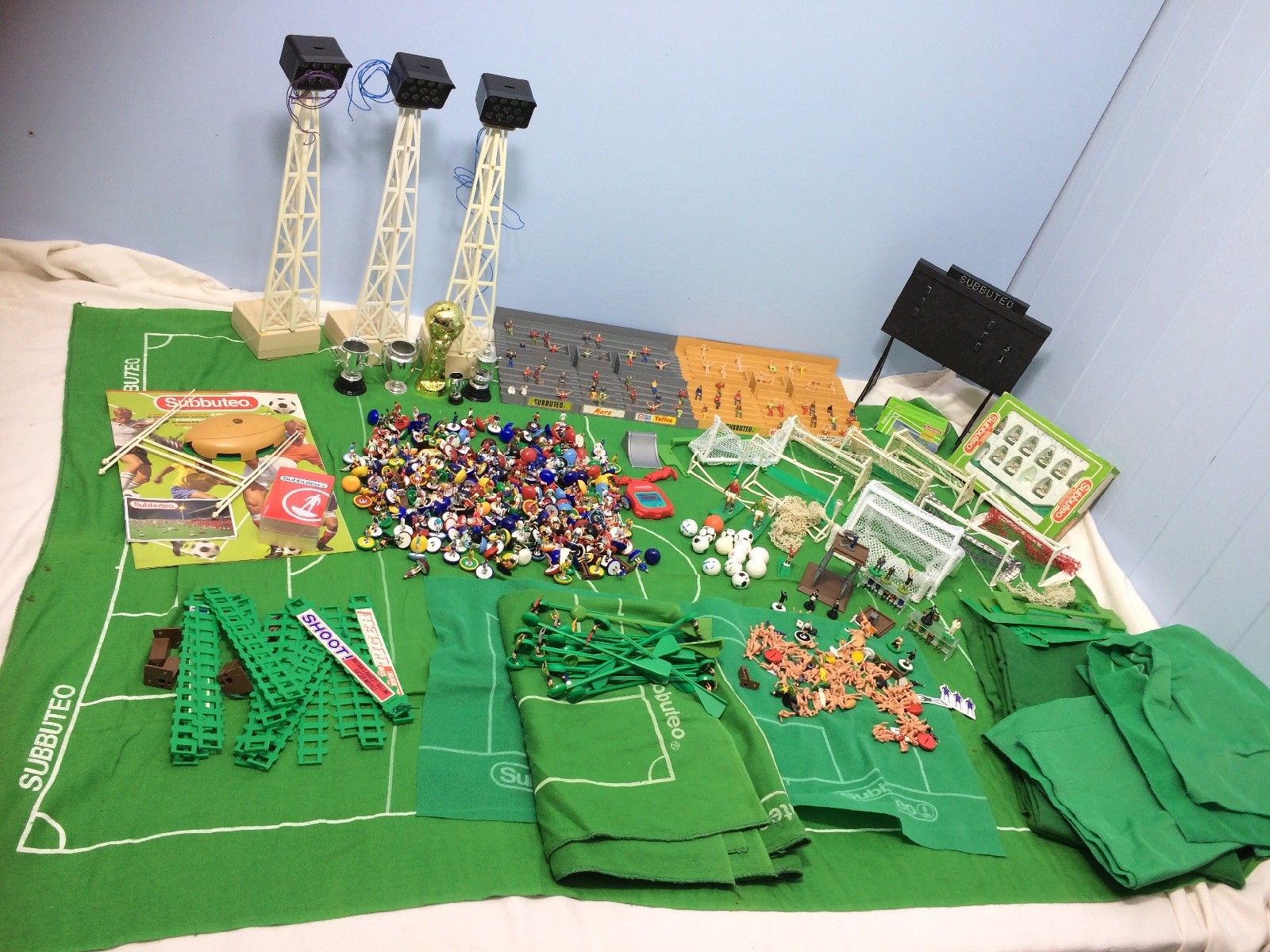 Even without the Subbuteo League Cup – the rarest and most valuable trophy in the Subbuteo world – this is a hefty job lot featuring a selection of pitches, part of a rugby box set, teams, scoreboards and three floodlights.

However, it is the League Cup that has pushed bidding to £175 (at the time of writing) with less than a day left. There are 22 bids but you can fully expect many more to come in during the deadline.

There may even be a complete team or two in that vast collection of loose players, while unpainted spectators and terraces complete the rather exciting Subbuteo lot. You can view the listing here.

We know Subbuteo heavyweight teams, made pre-1981, can be an expensive buy. It’s the purist’s choice of collection and as such it’s no surprise to see big bids attached to a collection of what looks like eleven complete teams, plenty of extra players and a few accessories such as the FA Cup and corner takers.

The current bid is at a massive £310 after 31 bids. It looks like the beautiful Calgiari team and its famous red and blue shirts has something to do with that. Italian teams are always in high demand due to the game’s popularity in Italy and that will surely be bumping up the price of this job lot.

It’s not the only heavyweight collection currently up for sale. A huge collection featuring 14 teams including rare international side Haiti, an FA Cup, an old grandstand and several other accessories is listed for £310. There are no bids and a day left but it is likely somebody will take the plunge. You can see that collection here. 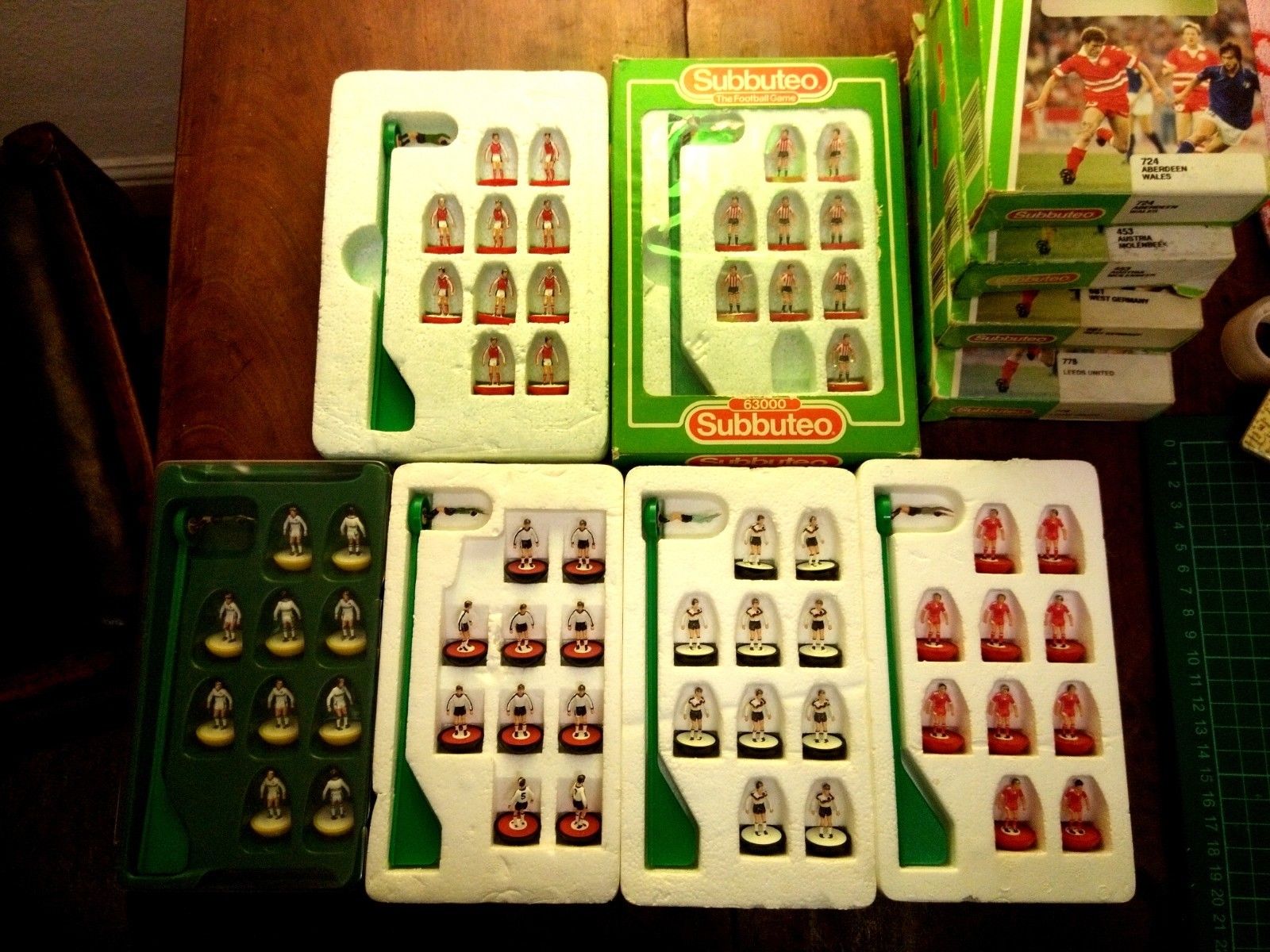 Ok, let’s move away from the ultra-expensive job lots and take a look at a nice little collection of six lightweight era teams from the early 1990s.

The teams include Austria, West Germany, Arsenal (you’ll find one of these in every single lightweight job lot), Aberdeen, Leeds and Southampton and at a price of £20 plus £3.95 delivery it is a reasonable price for the teams – even if Southampton are missing a couple of players.

It works out as less than £4 per team at the moment and with just two days left if you can keep it under £30 it represents a nice bargain. You can see the job lot here. 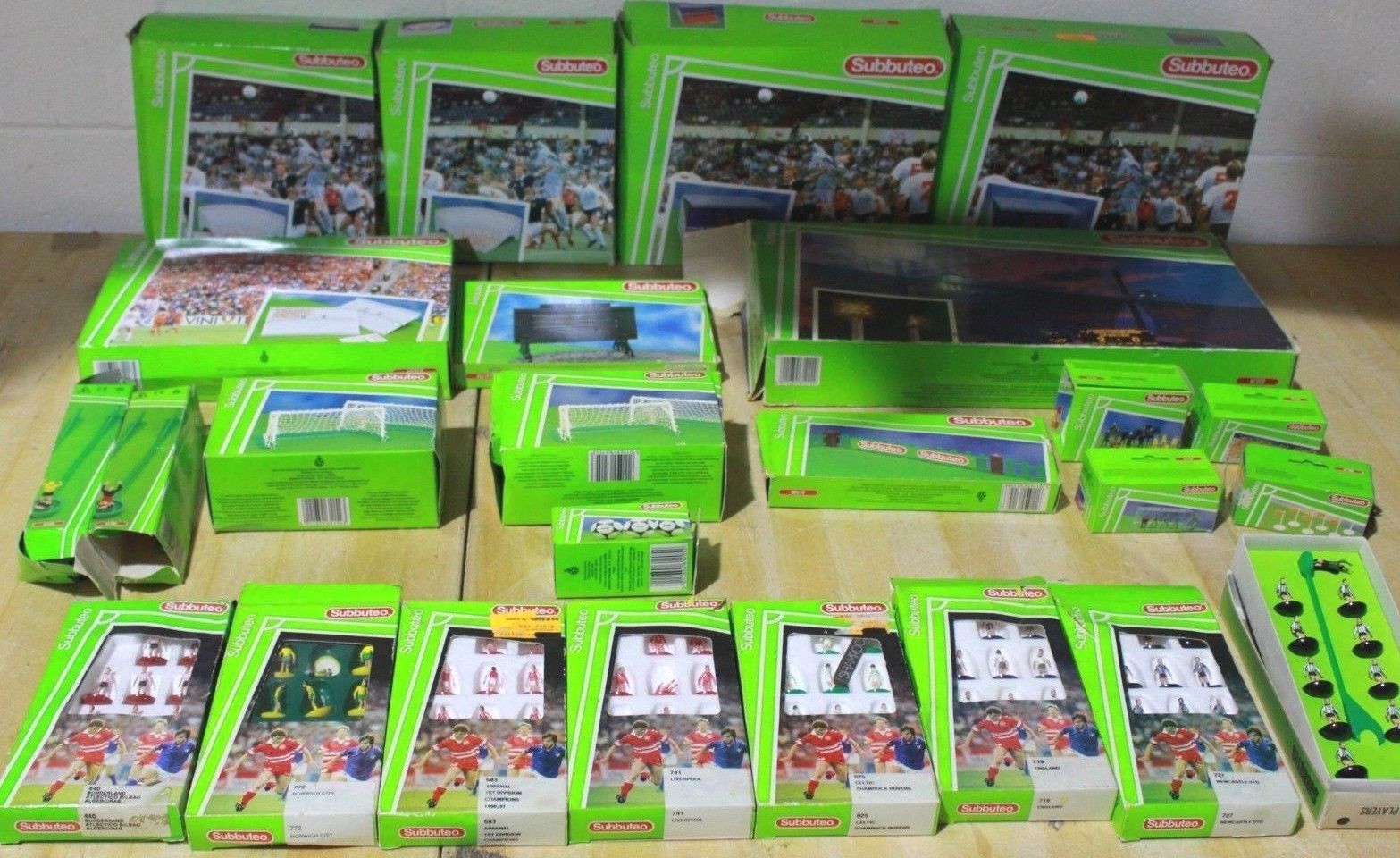 We’re heading back up the price range for another massive lightweight job lot featuring seven lightweight teams including Arsenal (told you) and a nice Norwich City set. There’s also a heavyweight team, four stands, floodlights, all the accessories you need to get set up with a stadium and even some lovely white Adidas Tango balls.

This is an exceptional set of early 1990s Subbuteo and bidding has now reached £117. That still represents a bargain given the stands alone sell for around £30 on eBay on a good day.

There are four days left so don’t expect that price to stay as it is. It will be interesting to see if it reaches the £200 mark before the end of the auction.