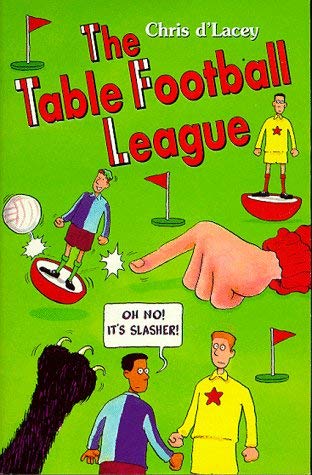 Being the son of a librarian, my childhood was full of reading – mainly as much sports fiction as possible.

That’s how I discovered the book “The Table Football League” a copy of which I still own today.

The story centres around young Noel Hooper, who receives a Subbuteo set off his dad for Christmas.

When his best friend gets the same gift, they decide to create a Subbuteo league at school, which leads to a five-team league including Janice, who would provide the usual distraction that females often create in these stories.

One of the Subbuteo players himself plays a starring part, the unorthodox Willie Mackintosh, while there are some other cracking names to teams and players, including Munchester United and Ole Gunnar Saltcellar.

From painting teams to controversial goals, brilliant commentary and transfer stories, it really is a fantastic demonstration of the beauty of Subbuteo, and a perfect way to introduce a youngster to the beauty of the game and playing it with others.

The five friends – Noel, Liam, Janice, Andy and Tim – play each other home and away, using pitches at each other’s houses, with varying “weather” issues – including a bobbly pitch (with it being an old hand me down), wind from an open door, and goals made from an old onion bag.

Tim offers a voice of commentary to all games, and it comes down to a three-way fight for the title.

Noel’s dad offers advice and training to his son, including post-match video analysis, that is interrupted in dramatic circumstances by their house cat Slasher.

Author Chris d’Lacey must have been a Subbuteo fan to have penned this book, and the inspiration he draws to bring out the fun and interest is brilliant to read – as a child or an adult.

Though it was written and published in 1998, you can still find copies of it on the likes of Amazon.