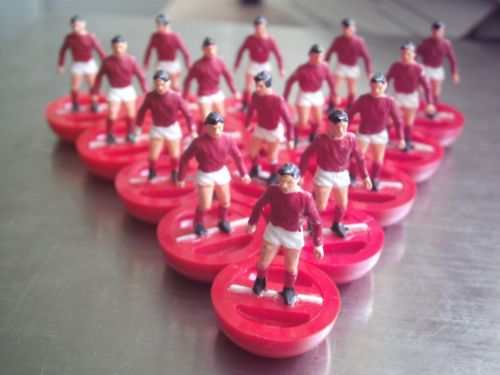 The story behind the chunky Subbuteo Rugby figures

Subbuteo Rugby teams first appeared as an accessory in the early 1970s, and were firstly only available in the Chunky style figure on the all one piece base.

The story behind those figures dates back to a very long and bitter battle between Peter Adolph and Newfooty, which ended with Subbuteo buying out their rivals, based in Liverpool and run by the Keeling brothers and other members of their family.

The Chunky style figures were designed and produced by Newfooty for the use in a version of their table football game. Subbuteo took these figures along with a few other things and used them for the 00 Scale version of Subbuteo Rugby. They were produced until 1976.

Like all 00 Scales figures of that era they were hand painted, so the standard at times were not great. In the mid 1970’s due to the increased cost of producing plastics, the Heavyweight football figures began to be used on rugby bases. From 1977 onwards, Rugby teams were also done using both traditional Lightweights and Lightweight Zombie figures. So all in all there were numerous teams in various figures to be got.

The reference numbers were 1 to 37, however there were variations to certain numbers, some never got to be mentioned in catalogues.

There were also 12 teams produced for the Italian market, they did not have reference numbers, just names, and came in boxes with either the name stamped on the side or written by hand.

There has for many years been strong rumours that club sides were done for the French market, whether or not you could class them as Original Subbuteo teams is open to debate. The French importers and distributors often customised existing Subbuteo products, by repainting them with gloss paint.

These were only done on the chunky style figures. The club sides rumoured to have been done are Sporting Club De Paris (nowadays Stade Francais), Brive, Toulouse, Perpignan, Biarittz.

But new teams continued to be produced to this day, and you can still find old teams on various auction sites, car boot sales and at Subbuteo swap meets

You can buy any reference number team, retro and modern rugby league and union teams from World Subbuteo Rugby.