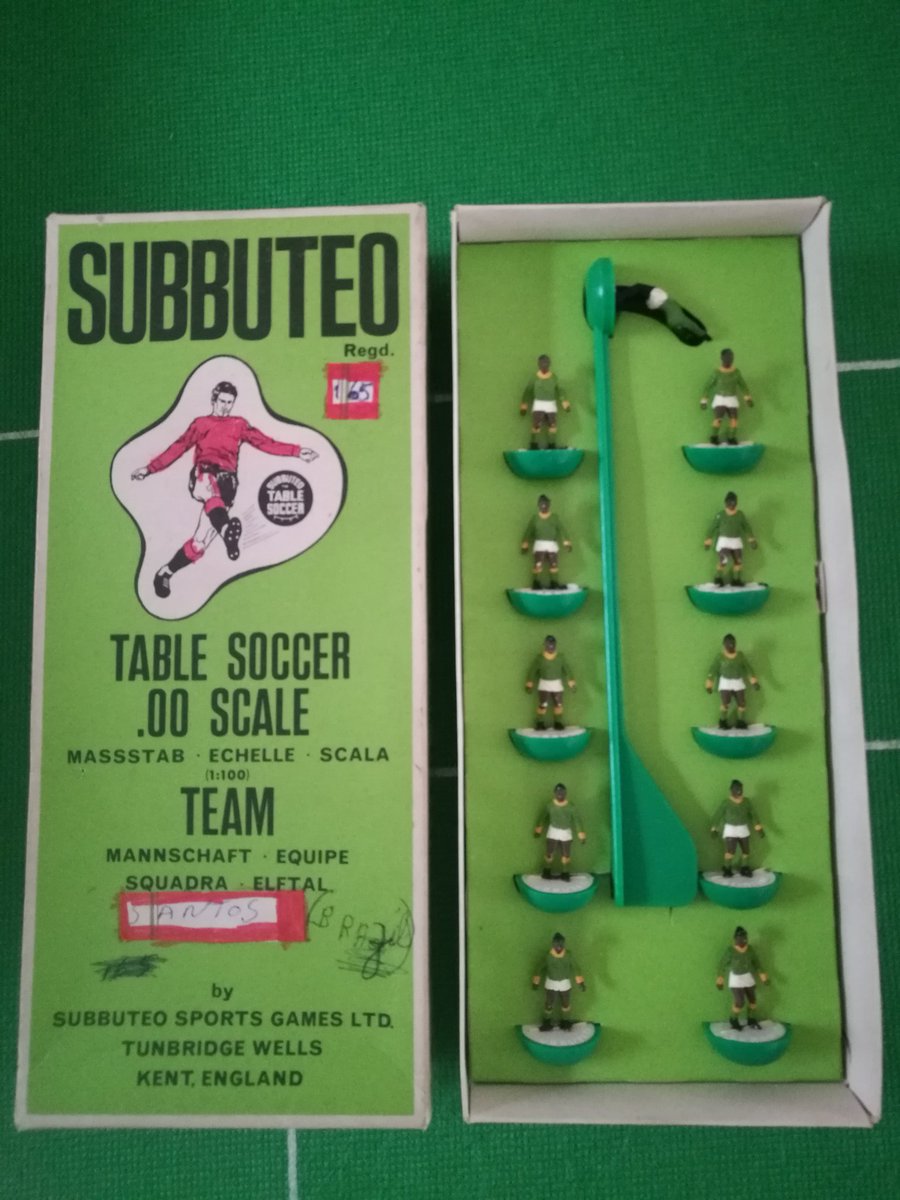 Last week I stumbled across a mint condition Santos team in an antiques shop in Liverpool.

The owner was happy to sell for a great price and we spent a good few minutes rummaging through an old suitcase of bits as he reminisced about playing with them as a child.

I also bought a Brazil team – but the Santos team was the one that caught my attention. The reason? The colours are completely wrong.

The Subbuteo set (ref 165) features a team in a green kit despite Santos famously wearing white. Santos first arrived in 1972/73 as part of a big expansion of clubs and were the first Brazilian club side available in Subbuteo.

So why did the team appear in a green shirt with white shorts and yellow trim? It is far away from the famous all white kit worn by Pele, Jair, Carlos Alberto and Clodoaldo.

In fact, the Santos kit would have been known in Europe. Pele and his Santos team toured Europe in the 1950s and such was his fame it was rumoured Santos locked him into a contract to ensure he did not seek riches in the European leagues.

By 1962, after high profile games against the likes of Real Madrid and Barcelona, Santos played Sheffield Wednesday in front of a feverish crowd of 50,000. They later played Stoke City, where Pele stunned with a superb solo goal.

Other games followed, so it seems inconceivable Peter Adolph, the owner of Subbuteo, did not know what colour they played in.

Theory One – The Ornithology trip

However, a rumour on the Independent Subbuteo Forum suggests otherwise. It claims Peter Adolph was on an ornithology trip to South America and saw Santos playing in their away kit. Assuming that was their main strip he used the colours on the Subbuteo set.

My research indicates Santos used a black and white striped kit as their away kit during the 1950s but it is not impossible that a green shirt was used.

Theory Two – The Other Santos

It may be that Peter Adolph went to see the other Santos in Brazil. The little known Associacao Atletica Portuguesa Santos are based in Santos and were founded in 1920.

The club, whose mascot is a female donkey, was in the Brazilian first division in 1964 and, most importantly, have green as their main club colours. The current shirts are green with red stripes and white highlights, as well as white shorts.

It could be confusion over which Santos to use saw the AA Portuguesa Santos kit used instead of Pele’s number.

The white kit had been a staple of Subbuteo since the beginning, representing Real Madrid and other sides for years.

Is it possible Subbuteo wanted to launch a Brazilian team and, given the fame of Pele, there was only one choice? Not wanting to recycle an older design they simply kept the white shorts and threw in some green and yellow to represent Brazil?

After all, the yellow shirts of Brazil had become iconic with the introduction of colour televisions and it may be that Subbuteo took some poetic license for the most exotic team in the their stable.

Whatever the reason, Subbuteo persisted with the green for lightweight kits too, forever a quirk of the Subbuteo world and another reason why collectors love the eccentric but rewarding hobby.