Subbuteo can be a social game.

Clubs can be set up with just three players, forums are filled with discussion on collectables and the collector’s fairs are usually packed with fans of the game.

In keeping with the social aspect of Subbuteo, it makes sense that a brewery would consider it a great addition to any brewery tap they had.

Last week we discovered a brewery in the USA is not just offering some top beers to visitors – but also Subbuteo. Sounds perfect, right? We asked Tony Williams of BlackRock Brewers in Tucson to tell us more.

He says: “BlackRock Brewers is Tucson’s only east side brewery. We’ve been open for 18 months and have 12 beers on tap. We specialize in approachable, balanced beer, seasonals, and some specialities.

“For beers, we cover the spectrum, with 2 award winning IPA’s darker beers such as our porters, and lighter beers like cream ale and AZ pub ale. We also have an amber and a Scottish ale. We also currently have a roasted green chilli hefeweizen seasonal on tap.”

The most popular beer with customers? It really depends on when you turn up. He says: “The best seller depends on the season. And sometimes It’s our seasonal strong Scottish Ale. We make everything on premises and have 22 oz bottles of our speciality beers available at different times during the year.” 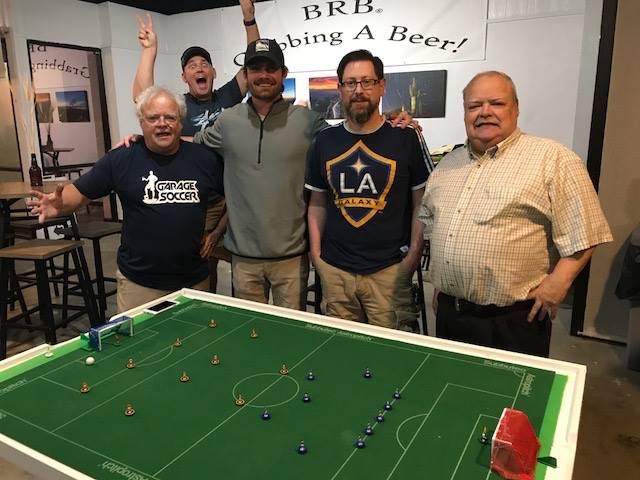 The brewery sounds brilliant, but what does that have to do with Subbuteo? Tony has added Subbuteo to the brewery tap’s game nights.

He says: “Tuesday nights are typically when we host it, and the number of folks playing varies, from 2 – 8. We regularly have folks play for the first time as well.”

So how does a bar in Arizona suddenly become a hub for Subbuteo? The answer is through a friend of Tony, Sean Tidy.

“I was playing board games at BlackRock regularly when I was introduced to Subbuteo about a year ago,” Sean explains. “I immediately became fascinated, and along with the gentlemen who introduced me to the game, started weekly Subbuteo night.”

“We run seasonal leagues and the occasional WASPA tournament. We have a regular group of 6-8 players that participate in the league and tournaments. We often get onlookers, or folks asking about the game, but only occasionally does anyone actually play. We’ve also run demonstrations at local game days, and during MLS pre-season here in Tucson.”

Subbuteo and beer? It sounds like Subbuteo.Online needs a trip to America soon…