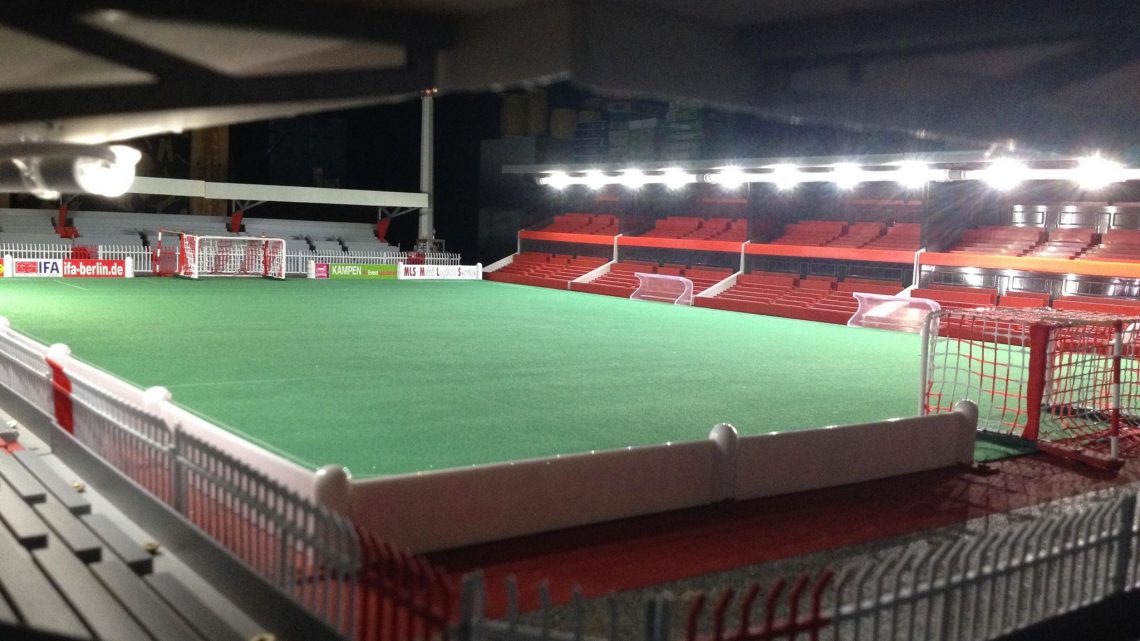 At Subbuteo.Online we love a Subbuteo Stadium and there is now quite a collection on the archives on our site.

However, we have never asked anybody for how they have actually created these fantastic designs. Until now.

Nico kindly shared pictures of his compact, atmospheric Subbuteo stadium in the Subbuteo Revival Group on Facebook and told us a bit more about the spectacular build.

Nico says: “My stadium was inspired by the “Stadion an der alten Foersterei” (Stadium next to the Old Forester’s Lodge) which is located on the southeastern edge of Berlin in the district of Koepenick.”

And it looks fantastic, with atmospheric terraces, crowd barriers and even working floodlights giving the stadium an intense feel that crowds around the pitch and looks almost like a photograph of a real-life stadium. 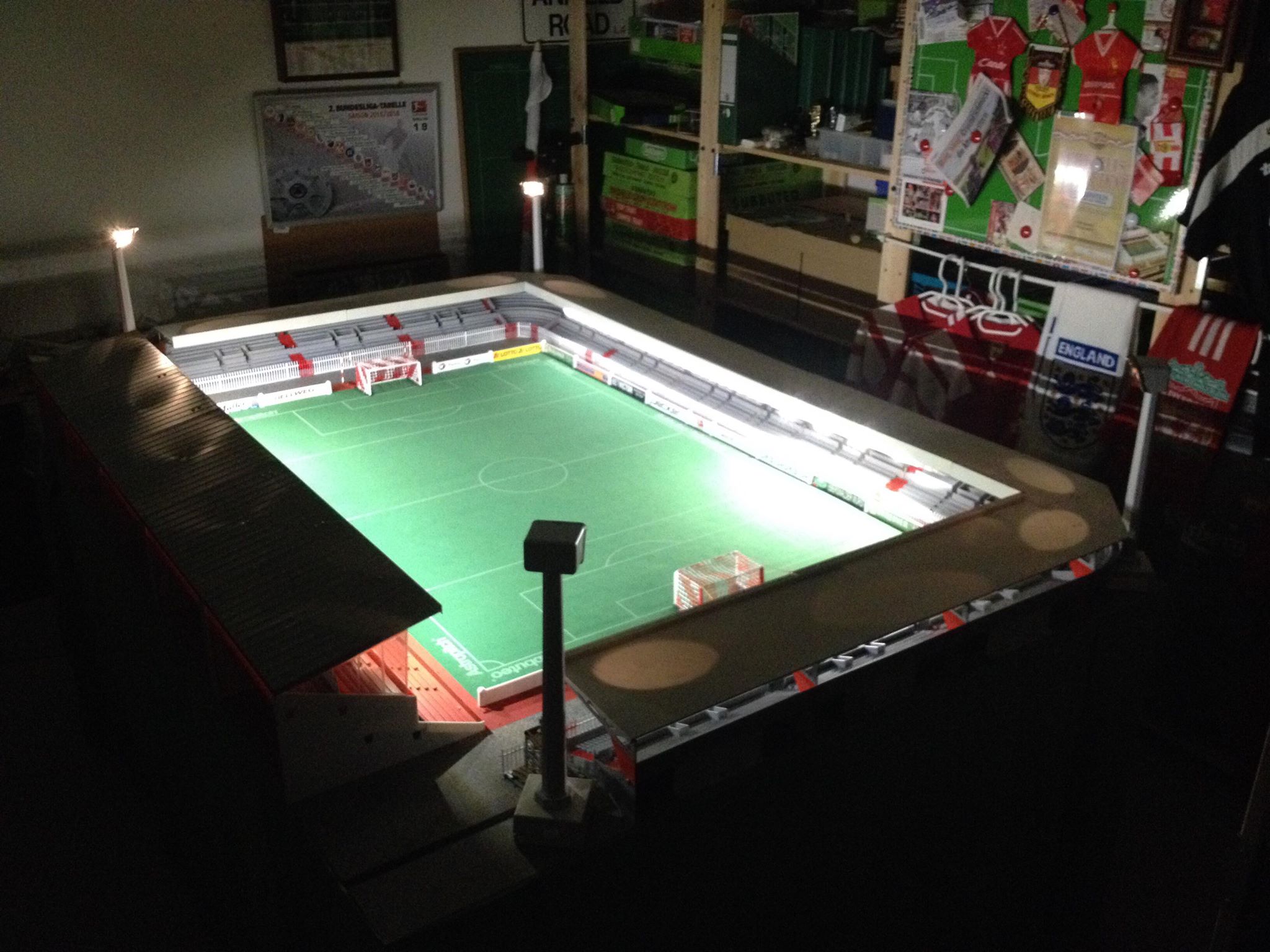 Nico described how he created the stunning effect. He says: “It’s far from being an exact replica of the home of FC Union Berlin but it reflects the main principles of one of the best stadia in Germany: Three fully roofed sides of the ground consist of standing only terraces. The height of these, the slope and the concrete colour resemble very much the Subbuteo Terrace Set 61217 and there’s hardly a stadium that has got a corner section as close to 61218 Corner Terrace as this one. These three stands are divided from the playing pitch by 61170 like Crowd Barriers.”

The Main Stand was also self-built but it is in keeping with classic Subbuteo accessories. 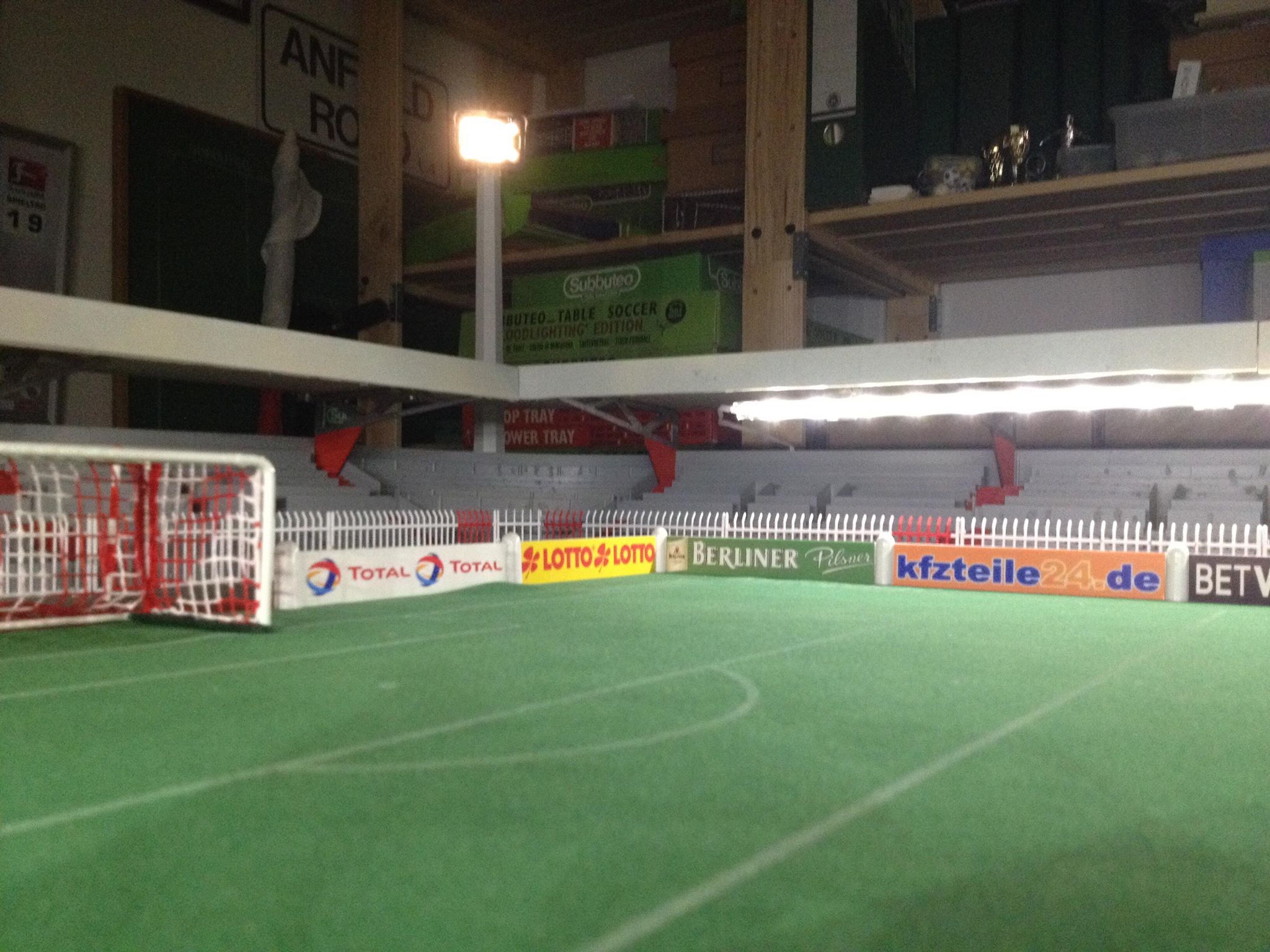 Nice explains: “The main stand in it’s current shape and size was only built a couple of years ago. Again it’s design is similar albeit not an exact copy of 61216 Subbuteo Grandstand. As was mentioned before it was not the target to build a 1:1 depiction of the actual ground but to use Subbuteo (and partly Zeugo) items to create the same unique look in general. Nevertheless I tried to keep it as close as possible with the things handily available and I certainly put in a lot of details (e. g. giving the goal netting a two colour tone like the real ones, painting the Crowd Barriers, searching for the club sponsors on the internet to replicate the fence advertising). Most of all the roof for the standing only sections is custom made. I put a lot of effort into the construction of the balsa wood roof which is fixed on pillars specially cut by laser to give a good impression of the life size originals.” 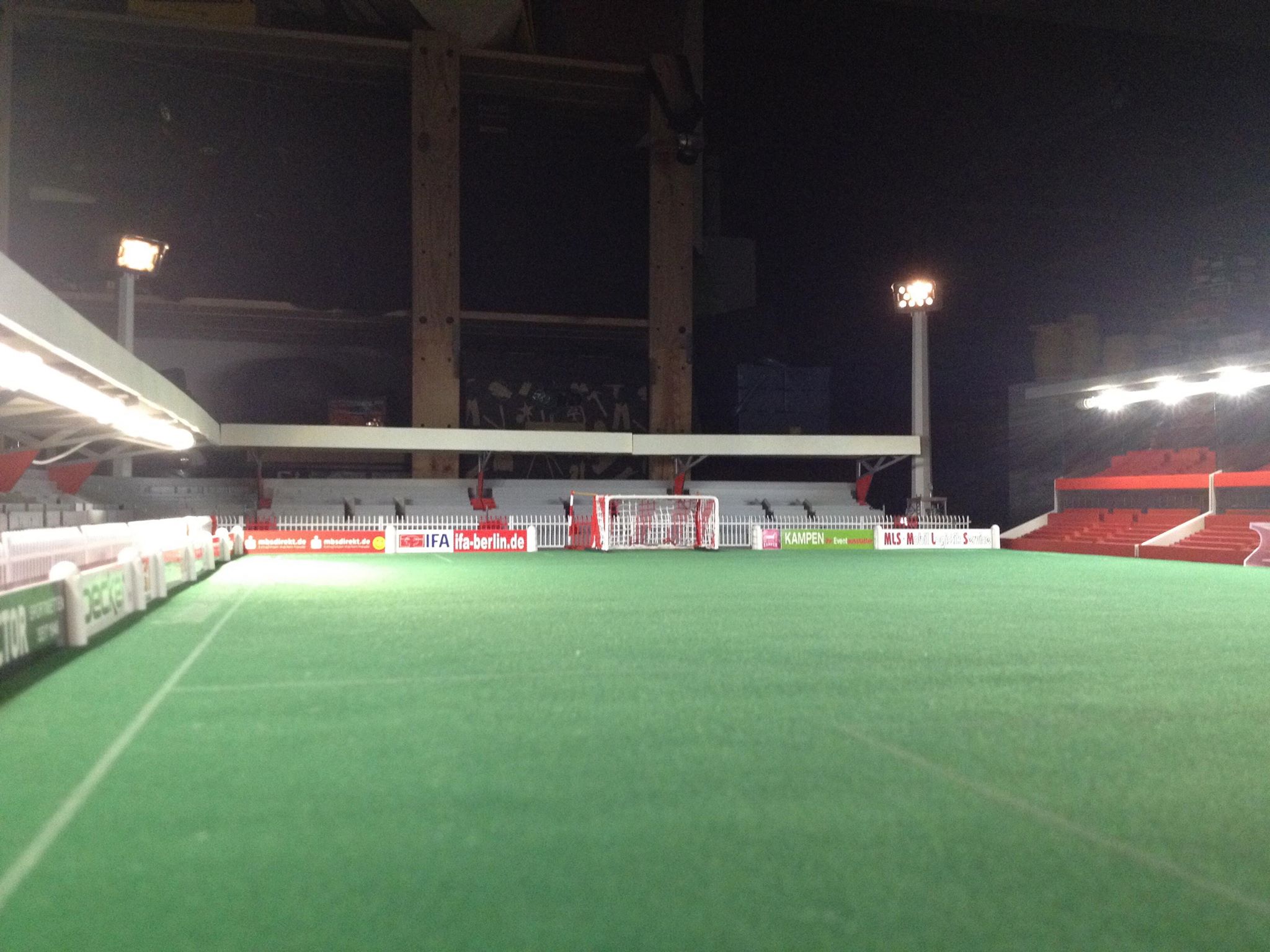 Nico has similar thoughts to us on Subbuteo stadiums. He admits he has been inspired by the weird and wonderful stadiums shared on social media and loves to see the work of others.

He says: “When I started work on it I only knew of the well known and fantastic Stadium of Fingers. Since then I’ve seen plenty of marvellous Subbuteo stadiums on Facebook and Instagram and mine is modest in comparison to those. But like FC Union Berlin itself it’s down-to-earth and faithfully. Furthermore every stadium project, even the smallest approach, is admirable and it ignites fantasy with the viewer and fantasy is what Subbuteo is all about as far as I am concerned.” 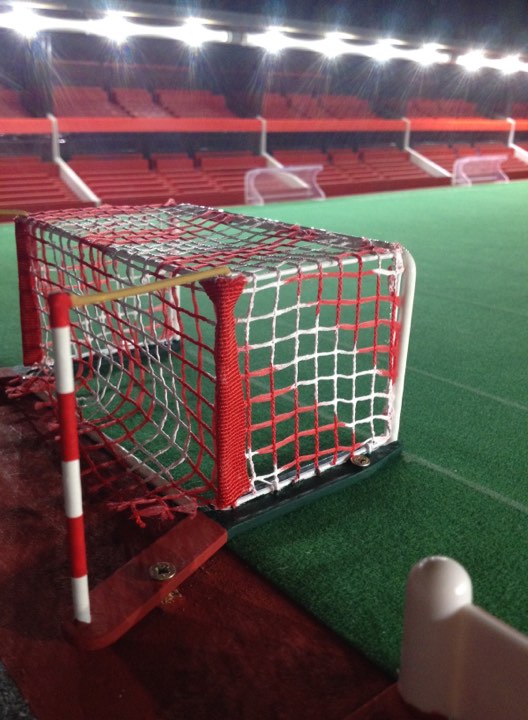 So what next for Nico’s superb stadium?

“He who has built a stadium himself knows that work virtually never stops and there’s always room for improvement. I still have to fill the capacity with a decent crowd. In real life I love that 18.000 of the 22.000 capacity are standing only but it makes things difficult Subbuteo-wise as the standard Crowd Figure 61168 prefers to sit down and – to make things worse – to be naked. Next time you might see the Main Stand full with handpainted spectators. But for the other sectors I’ll most certainly go for printed crowd (like the cardboard sheet issued together with Subbuteo’s Deluxe Edition in the 1990s) to gain a quick win. Nevertheless my dream is to find a suitable model figure type in standing posture and paint that in masses.” 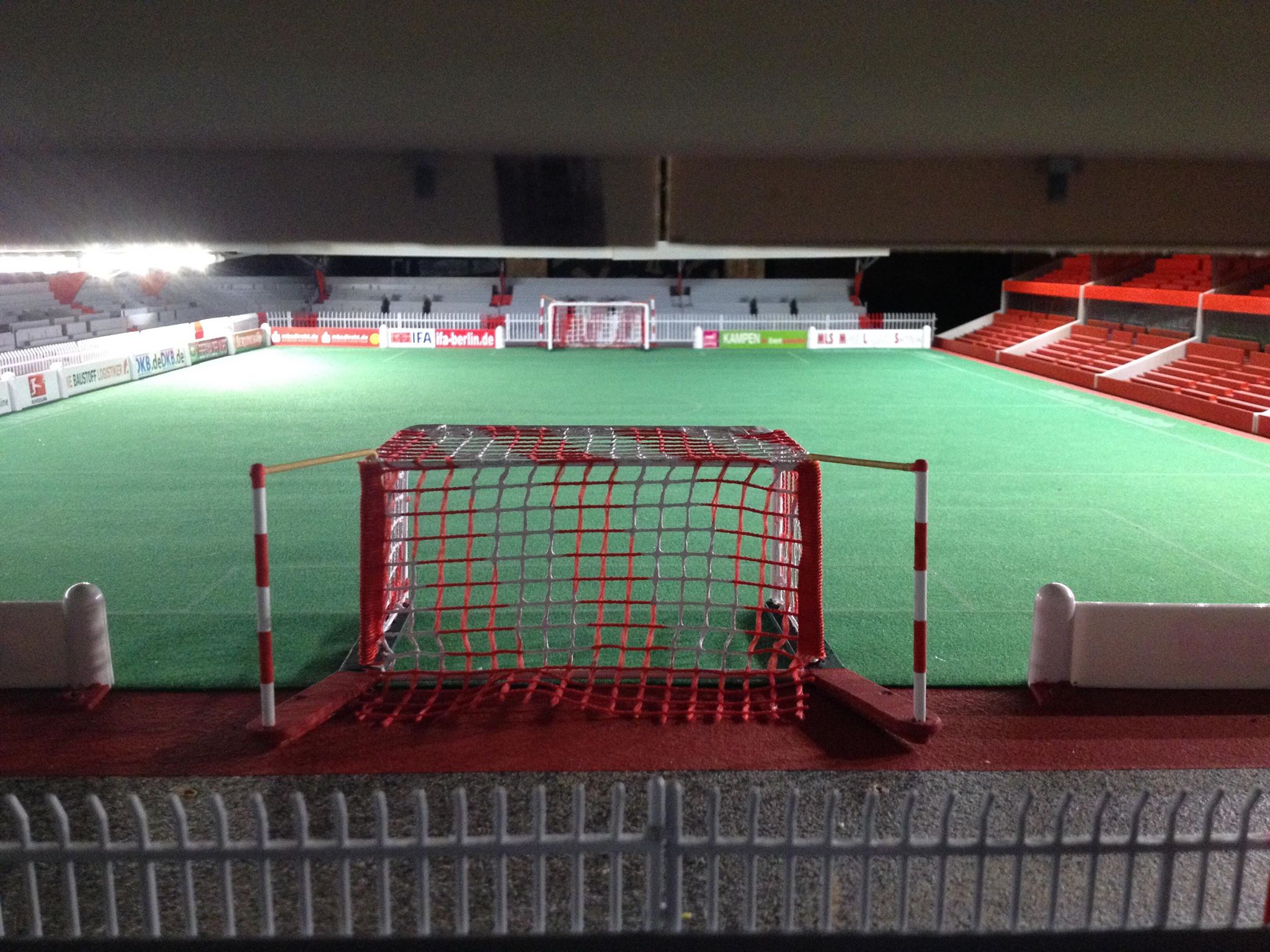