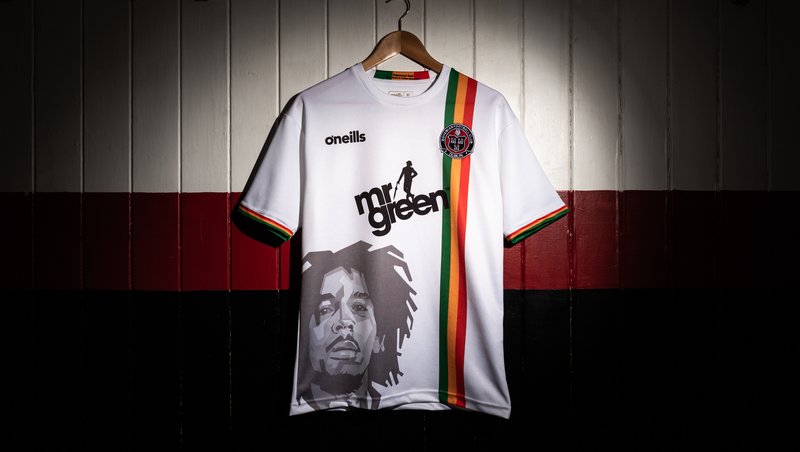 The popularity of Subbuteo is largely down to getting your hands on teams with striking kit designs and unusual features.

After all, who isn’t excited by the likes of the Nigeria 2018 World Cup kit being recreated in official Subbuteo style next month?

However, one new kit released this week would probably go down in history as the most unique shirt design ever produced in Subbuteo form – the new Bob Marley kit launched by Irish side Bohemians.

The away shirt for the new 2019 season is fantastic, with a picture of the Reggae legend himself adorning the bottom corner of the shirt and a rainbow stripe down the other side.

A club statement says: “Dalymount Park has played a unique part – chiefly in the sporting – but also in the musical and cultural history of Ireland.

“The Home of Irish Football was graced in the 1970s by Thin Lizzy and the Boomtown Rats, in the 1980s by Bob Marley, Meatloaf and Black Sabbath, and in the 1990s by Faith No More, Sonic Youth, Ice Cube and the Red Hot Chili Peppers.

“This jersey, designed by Bohemian FC in conjunction with our new kit supplier O’Neills, gives a nod to that history – and to the stadium’s special place in the hearts of both football and music fans.”

What has this got to do with Subbuteo? Not a lot, sadly. The kit will never be made officially although fans of the hobby will no doubt be able to recreate it thanks to a talented and thriving community.

If not you will have to make do with the existing Bohemians Subbuteo team. It’s reference 70 in the heavyweight range and features a red shirt with a black collar, white shorts and red socks with black trim.

It is a rare team, discontinued from around 1975 and was later used as Coventry City away. Bohemian Subbuteo teams also appeared in the later lightweight teams alongside the likes of Eintracht Frankfurt as number 076.