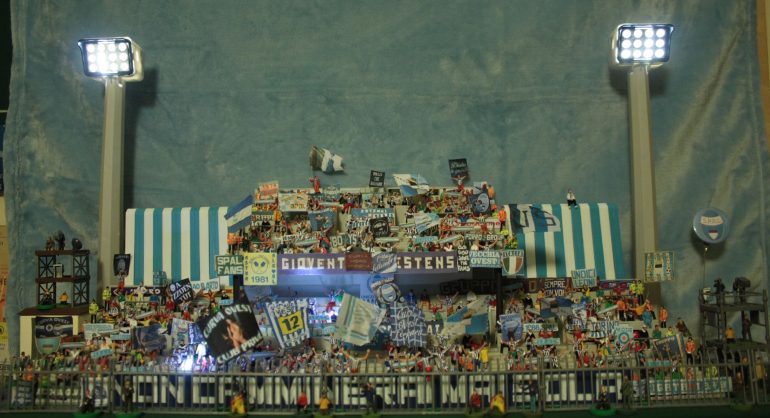 The stunning Subbuteo Curva display with light and sound effects

Filippo Caselli, an Italian Subbuteo collector, has an incredible room of Subbuteo filled with box sets, team boxes and merchandise from his Italian side, SPAL.

But not content with filling the room with Subbuteo goodies, Filippo has also created some beautiful Subbuteo fan displays based on the famous ultras culture in Italy.

Italian ultras are fanatical fan groups who often gather behind the goals – or Curva – and create an atmosphere with singing, banners and plenty of passion.

They can be incredibly vocal and use ticker tape, toilet roll and even flares to create an atmosphere and always put on an amazing display.

Filippo has created unique Subbuteo Curva displays on traditional Subbuteo terraces and the end result includes sounds and a light show like you have never seen before.

He says of his vast collection and amazing Curva display: “I don’t have a whole stadium, but they are models of curves of S.P.A.L. I have a kind of green disease!”

He certainly does. His Subbuteo room also includes some rare items such as the Brazilian box set Pelebol, which was sponsored by Brazilian superstar Pele and was sold in South America.

Other highlights include a France 98 box set, the Subbuteo Sound vinyl and various team and accessory box sets in what look like mint condition.

Take a look around the room below.