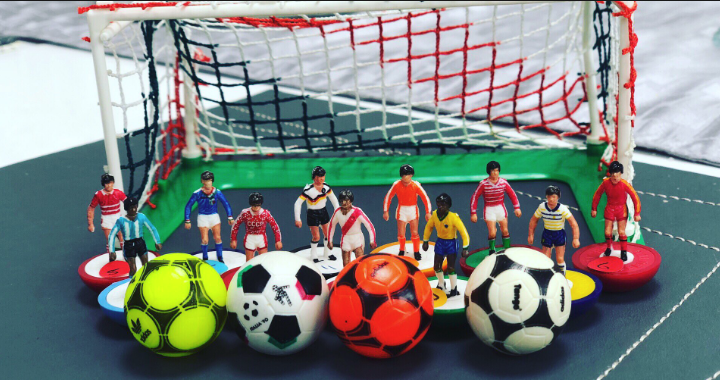 The most important accessory in the Subbuteo range is the ball. It is one of the few accessories sold by Subbuteo and used in the main game that is not scaled to OO size, meaning the ball dwarfs the players on the pitch.

There are several different types of Subbuteo balls launched through the years with various sizes, patterns and designs offering different ways of playing the game.

Whether you are choosing a ball for the aesthetics or for the way it plays, balls can not be ignored by an Subbuteo fan. They’re also great to collect, with prices of under £10 for the majority of official balls sold by the brand and around £10 for newer, unofficial decaled balls.

In a recent episode of Net Flicks – The Subbuteo Show, we discussed the best Subbuteo balls money can buy. You can watch that below.

Below is a brief list of every Subbuteo ball ever produced – or the beginning of a list. If you know of a ball we have missed please get in touch at subbuteoonline@gmail.com or via our social media and we’ll add it in.

The original balls came in two sizes and three colours. Balls were either small or large, with old-style panels giving them a retro feel. They came in orange, white and brown.

Larger balls were Set F and the smaller balls, which were easier to score with, were Set FF.

These were replaced by Set C144, which features three panels instead of two. The smaller balls were also re-released in the 1980s and were used for C145. The small orange balls appeared in NASL indoor sets.

The C121 balls were released in the late 1960s and featured either spots or pentagons stuck on with stickers, which can effect the roll of the ball.

White versions of the continental balls were added in the 1979s and later balls had the patterns printed on instead of using stickers.

Coloured alternatives also appeared at a later date and named ‘Tournament balls’. These were labelled as Set 167.

After the Continental balls came the FIFA balls as Subbuteo experimented with more interesting designs. These are thew C183 FIFA designs in red, blue and black.

The Ariva balls were the first to feature advertising and were given the C190 monikor. They were used by US importer Jokani and used in the NASL box set.

The High Bounce balls were made of sponge and were used to represent indoor Subbuteo. These were C191 in the Subbuteo catalogues.

The Mitre balls are usually associated with the 90s. These balls appeared in separate packs and box sets throughout the decade.

Like the Mitre balls, the Umbro balls were used in box sets and individual packs from the 1980s onwards.

The most popular Subbuteo balls of all time? Possibly. The Tango design is loved by many Subbuteo fans. Available in White, Orange and Alicante Yellow, the latter also comes with a rarer Trefoil logo option that is one of the hardest Subbuteo balls to find.

Subbuteo went through a phase of adding specialised tournament balls in box sets, starting with the wonderfully detailed Italia 90 balls. The USA 94 balls followed, while the Euro 96 ball was the last of the dedicated football tournament balls. Later France 98 box sets featured a standard Tango.

The Manchester United box set of the early 2000s brought the only ever ball to feature a team’s logo. A second ‘special’ ball featuring the Budweiser logo was used in special box sets as part of a marketing campaign.

A final special edition ball, a white Adidas ball with the blue Trefoil logo, was sold only as an addition to the Adidas Subbuteo Trimm Trab limited edition trainer. Each box game with three Subbuteo balls.

On top of the special edition balls there are also a number of standard Subbuteo balls used in box sets and packs throughout the lightweight Subbuteo era.