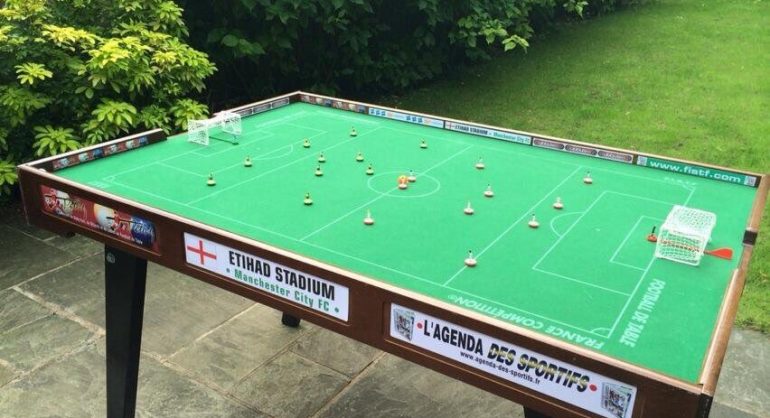 A Subbuteo table with a star-studded history is being auctioned for charity.

Author Joanne Lake has taken to Twitter to put her beloved Subbuteo table up for sale – and it comes from a familiar source.

The table is clearly a Flick for Kicks design. The Scottish maker is one of the best in the business and it is sure to be a quality table.

However, there is one final twist. Joanne’s husband is none other than former Manchester City and England u21 star Paul Lake. The talented midfielder and City cult hero unfortunately saw his career cut short by injury but has clearly retained his love of the game.

The table itself was used by the couple’s children but is now being auctioned off to raise money for SPARC, a charity that combats loneliness and isolation – a fitting cause given the current situation.

Silent auction bidding is open via Twitter until noon on Wednesday 20 May so move quickly if you want to own a little bit of Subbuteo and Manchester City history.

He said: “Nooooooooo! Great cause and all that but you CAN’T sell the subbuteo table! Ever! It shoujd be handed down through the generations of your family and if ever looking the worse for wear sent to The Repair Shop! A thing of beauty and delight and nostalgia.”

However, Joanne replied: “Our family has had lots of joy from the table over the years, but as our kids get older their interest is waning, and we know it would just end up gathering dust in our garage. We’re ready to pass it on to someone else now, and raise some dosh for a good cause.”

You can bid on the table by heading to Joanne’s Twitter page.