The first picture of the Iceland 2018 World Cup Subbuteo team has been revealed a week before it goes on sale in Italy.

The Iceland team is the 19th new Subbuteo team launched this year as part of an 80-part ‘legends’ range celebrating the best International sides.

Based on the classic Subbuteo heavyweight teams sold before 1980, the La Leggenda Platinum Edition range is being sold only in Italy as a part-work. Each team is sold with a booklet showcasing the side’s tactics and a selection of accessories including fences, referees, balls and a pitch.

The Iceland team that qualified for the World Cup for the first time in the country’s history finished bottom of its group after a draw with Argentina and loses to Nigeria and Croatia.

However, the narrow nature of the defeats and the fact the tiny nation qualified is enough to secure immortalisation in Subbuteo.

The unique Errol kit is blue with red patterned sleeves and is another detailed kit for collectors to get their hands on. 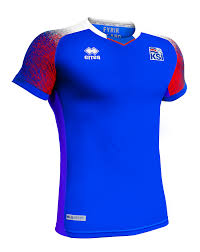 It is the third new team from the 2018 to be created in the range after fellow World Cup debutants Panama and Nigeria – whose green and white kit was a massive hit with football fans in the summer.

The new Iceland team, which includes the likes of Everton’s Gylfi Sigurdsson and FC Augsburg’s Alfred Finnbogason, is on sale from 29 December.

Some of the teams have now appeared on eBay and cost around £20 with shipping to the UK.

You can now buy Subbuteo postcards and they look fantastic