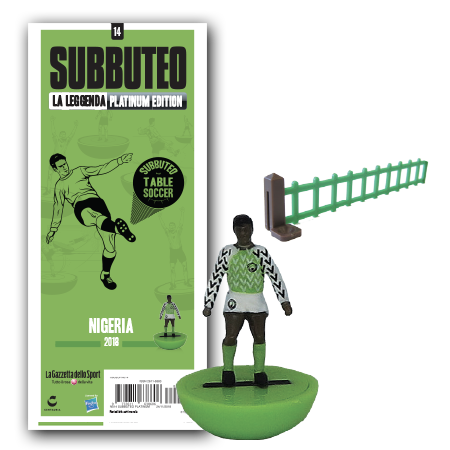 After Italian company Centauria revealed it was launching a Subbuteo set based on the Nigeria World Cup kit of 2018 we have been eagerly awaiting news of the team.

Now the first look at the team has been revealed and the detail on the kit is staggering.

The kit, which sold out after three million pre-orders were lodged with Nike before it even went on sale, has been lovingly recreated as part of the new La Leggenda Platinum Edition range.

The green zig-zag patterns on the kit, black and white sleeves and numbers and badges are all included in minute detail and the box is set to be one of the most collectable Subbuteo teams for years.

It follows a first look at both the new Panama 2018 team and the Portugal 2006 squad, which are the latest to be released in the 80-strong range.

The Platinum Edition is only sold in Italy as a part-work, meaning teams and accessories are sold each week alongside a magazine. Fans will have to collect all of the magazines to complete the collection.

Unfortunately UK buyers cannot get their hands on the collection, which focuses on classic international teams and has previously included Brazil 1994, Italy 1982 and even England’s World Cup winners of 1966.

The teams will eventually find their way onto eBay at inflated prices but until then fans can enjoy the first pictures of the Nigeria Subbuteo team – or paint their own as one talented fan did recently.