The Wales 2016 European Championship Subbuteo team has finally been revealed.

Chris Coleman’s semi-finalists were the stars of the tournament in 2016 after knocking out Belgium in the quarter finals. Despite a defeat to Portugal in the semi-final, Gareth Bale, Aaron Ramsay and Ashley Williams led Wales to their best ever European Championship finish.

Now an official Subbuteo team has been revealed and will go on sale in Italy only next month.

The team is set to be launched on 1 June in Italian newstands alongside copies of La Gazetta Dello Sport. However, UK buyers will only be able to get their hands on the team via resellers on eBay and other auction sites. 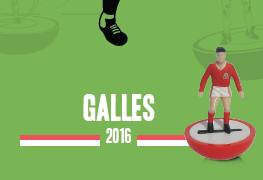 The sets are being produced by Italian company Centauria as part of the Subbuteo La Leggenda Platinum Edition range and is officially licensed by Subbuteo. The team is the number 41 out of 80 new sides being produced. The intricately detailed teams are based on some of the greatest national teams in history and also include the likes of England 1966, Holland 1974 and Italy 1982.

More modern teams include the likes of Croatia’s World Cup semi-finalists of 2018 and Nigeria’s team from the same tournament.

The Wales team, which is based on the same style as pre-1980 Subbuteo, named heavyweight Subbuteo, features the traditional red shirt with Wales badge, as well as white shorts and red socks.

However, the Wales side could be upstaged by another new team revealed recently. The next team – number 42 out of 80 – will be Trinidad and Tobago’s 2006 heroes. The detailed team includes sweeping white trim on the predominantly red shirt, black shorts and red socks.

After Trinidad the next team in the range will be England’s Italia 1990 squad, followed by Mohammed Salah’s Egypt side of 2018.

A hand-built Subbuteo stadium with a stunning Main Stand