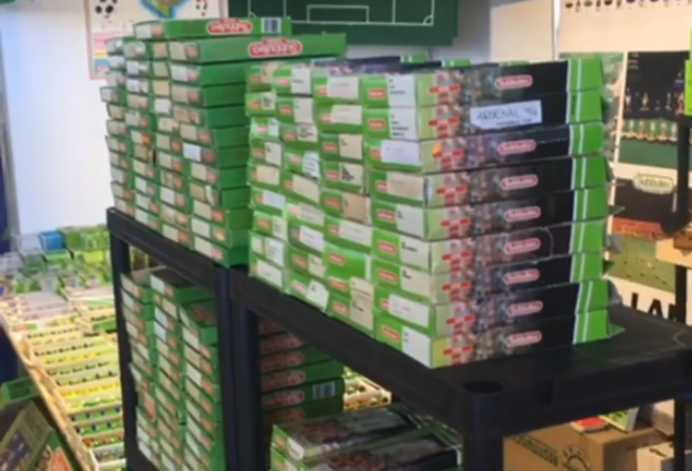 Over the last few weeks we have had a lot of requests to help value Subbuteo.

As more people pop up to the attic and dust of their old sets it is only natural to wonder if you have got some hidden gems that are worth a bit of money.

The bad news is, valuing Subbuteo is incredibly difficult. There are thousands of team colour combinations, several box sets and hundreds of accessories and they all vary in price.

Teams can cost from £5 to hundreds of pounds, while some box sets can fetch up to £500 if they are particularly rare. However, the majority are at the cheaper end of the scale. Even 1960s teams are usually around £10 unless you have something rare.

If you are wondering what makes a rare team read on – or check out the Mingardo scale – an Italian site that rates teams based on how rare they are. I

We cannot value your Subbuteo easily by writing 500 words – but we can give you a few pointers on how to judge if it’s worth looking at and if you want to know values you can email us at subbuteoonline@gmail.com.

Assuming the Subbuteo is original (we see a lot of fakes and painted teams) then read on for a simple guide to valuing your Subbuteo teams.

If you want to sell your Subbuteo check out our guide on selling Subbuteo here.

The rarer the better

The number one mistake Subbuteo sellers make is to assume just because Liverpool and Manchester United have legions of fans it means these teams will be in high demand with collectors.

In reality, the top teams were produced in huge numbers to meet demand and that means Manchester United, Liverpool, Arsenal and Spurs are all incredibly easy to find and fetch around £5-£10 on eBay.

It’s the same with international teams. The West Germany 1990 kit is iconic but they won the World Cup at a time when seven million people were playing Subbuteo around the world – this means a lot of sets were sold.

However, the more obscure the team the more valuable it is likely to be. This is because for many teams Subbuteo only sold them by request. That means teams from Norway, Austria, Switzerland and other minor leagues are now in high demand and can fetch up to three figures.

There are exceptions – there are some rare Spurs away teams, for example – but this is a good starting point to value your teams.

Ask yourself – how many of these teams were likely to have been made. If the answer is lots then you’re not sitting on a hidden fortune.

Pay attention to the kits

Subbuteo collectors are the original football hipsters. We like unusual colour combinations and will pay more for them.

A standard blue or red team is usually easy to find but a yellow and orange striped Partick Thistle? That’s probably worth more.

And just like football kit collecting iconic kits means demand outstrips supply. West Germany (see above) is the exception to this but the likes of Hummel’s famous Denmark side, Arsenal’s Bruised Banana kit, and Coventry’s famous Talbot shirt are all relatively valuable.

If it’s an obscure South African side with a funky blue, red and white kit then you could be looking at hundreds of pounds in good condition.

Is it an Italian team?

If you have dusted off the Subbuteo and you have an Italian club side it may be worth a bit more. This is because Italy still has a huge collector market and the entire country has a huge love of Subbuteo.

If it’s a smaller Italian side with an attractive kit (see points 1 and 2) then you could be in the money. A Bologna or Genoa will be worth more than an Inter Milan or Juventus simply because they are rarer.

While in general older teams are worth more than more modern Subbuteo there are exceptions.

The 1990s Subbuteo does have some gems, particularly if you have German, Italian or other foreign teams. International teams such as Russia’s famous CCCP kit are also worth more.

Here is a quick guide to the age of your teams:

The heavyweight box was used from when Subbuteo first introduced 3D players to around the late 1970s. Teams in this era were hand painted and are usually worth a little bit more if in good condition. Rare teams in this box are usually the most in demand and most expensive.

A later box used had a small window in the front so you could see a player. These are often associated with the ‘Zombie’ era of Subbuteo when players looked a little like zombies.

These are not hugely popular with Subbuteo players but their age means they can be valuable if it’s a rare team.

The boxes with the big windows were introduced during the 1980s and the lightweight player era (you will notice the players are now slightly smaller and lighter). These are still very collectable if it is a rare team, particularly if it is one of the early 1980s hand painted versions.

Towards the end of the 1980s and beginning of the 1990s we get a smaller window again.

However, rare teams in this period can fetch good figures. Teams can fetch up to £100 on eBay if they’re suitably rare, while extremely rare ones can go even higher.

This is where we see a lot of Manchester United, Liverpool, Arsenal and Spurs sets, as well as Forest, Blackburn etc. If you have a Scottish side like Motherwell, or teams from places like France or Portugal, you may have something valuable.

These are not particularly rare but there are still some gems in there such as Newcastle’s famous ‘Blue Star’ home and away kits. They are the last of the new Subbuteo in the UK worth anything really.

If your box says Top Spin, Zeugo or Santiago on it then it is a modern replica of Subbuteo. These are still nice teams but are not worth a huge amount.

If the set says La Leggenda on it then it is an Italian officially licensed team made from 2000 onwards. Again, they are not valuable but they are beautifully detailed teams and a great start for new collectors with a small budget.