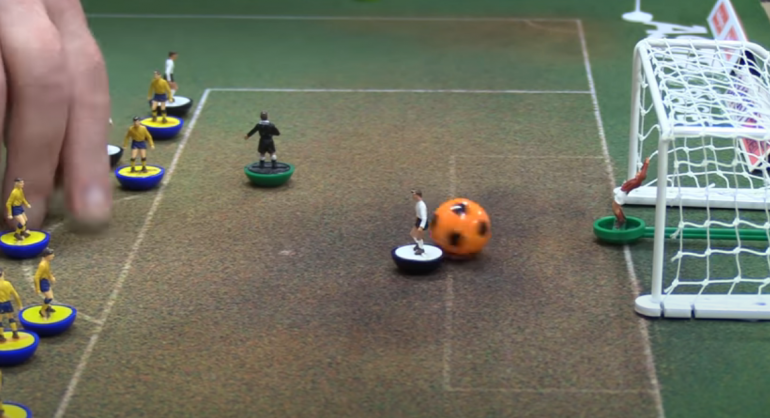 Inside the design of a brand new muddy Subbuteo pitch

If you have been watching the brilliant Table Football Monthly on Youtube you will know all about the Pegasus Astroturf pitch.

Subbuteo World stocks the likes of the new chequered astroturf, while previous versions featuring a circular pattern have been labelled the best Subbuteo pitch in the world.

But they are not the only pitches available – and the new Winter Pitch featuring a snow effect sold by Subbuteo’s Spanish license holder Eleven Force was a huge hit with Subbuteo fans when it launched earlier in the year.

Keith Littler, one of the brains behind the wonderful monthly show, is no stranger to beautiful Subbuteo pitches and in the latest episode he developed a beautiful muddy pitch.

He created a prototype of the pitch and promised it would go into production if there was enough interest. And it’s safe to say there would be.

We caught up with Keith to talk through the creation of the new Subbuteo muddy pitch.

This is his account of how he designed the pitch:

I remember watching a particular Star Soccer on ATV (Midlands Region) way back in ’71. The game was physical, it was muddy and Derby were at their peak under Clough and Taylor whilst Arsenal were only the second team in the 20th Century to do the League and Cup Double.

When the game was over my younger brother and I laid out our basic Subbuteo set on the dining table – one team red and one blue – and we played that game. At that tender age (10) I knew the pitch was wrong. I asked my Mum what we could do to make it muddy and she made it clear nothing was going to be done on her dining table.

I did my best ‘fag smoke and gin’ doused Huw Johns commentary but it wasn’t the same.

Leap forward to 2017. By now, with 31 years in Kid’s TV under my belt and my own studios, Smiffy and I decided to re-create a typical 70’s 3rd Round Cup Tie. Our Village Team, Churcham Town v Liverpool for my Table-top Years Documentary. I finally created the muddy pitch of my dreams with scatter and a brush. I built the Stadium, background scenery, set up lights and a camera and we set to. It was great but sadly not permanent.

Then in 2020, whilst working on a Table Football Monthly Edition, we received the Subbuteo Winter Edition pitch from Netcam Spain (then making Subbuteo under License from Hasbro). It was a revelation – if a bit hard on the eyes after playing for too long. Then the Pioneer pitch from Astrobase in Italy which was rather more sun bleached than muddy. Surely a genuine “British” muddy pitch would be forthcoming.

I mentioned it to a couple of manufacturers who were keen but put off by the technical difficulties of creating multi-colours on PVC backed Astroturf. Oh, for your interest, when it comes to designing mud believe me when I tell you it ‘ain’t just brown’. True representative mud requires bits of red, orange, yellow, flecks of green and on it goes

So I decided to design my own…but how?

First thing. Good reference materials. I combed old footie programmes, Annuals and magazines for pictures. It became clear that pitches churned up in different ways and to differing degrees depending on weather, drainage, usage and soil type. The one common thread was the general elongated ‘diamond’ pattern the worn areas took on between the goals.

Eventually I decided I would have to compromise. I decided on the Baseball Ground – home to Derby County and the venue for that memorable Derby v Arsenal match all those years ago. It churned up after only a couple of droplets of rain and never seemed to recover it’s lush pre-season green.

I sent a brief and colour guide to Jeremy Hopes who had designed the covers for my Table Top Years documentaries and the Table Football Monthly logo for my Youtube Series.

Once he had worked his magic it was off to Italy to look into printing on flock cotton. With some useful guidance from Astrobase a prototype was printed and sent back. I was mighty chuffed with the finish – though there were still areas to be improved but finally, over 40 years after witnessing that memorable Derby v Arsenal game, the pitch I had envisioned that day was lying on my table and being filmed for Table Football Monthly. All that was left was to place the correct HW teams in position, locate Huw Johns’ commentary and hit ‘Record’.

In the first week after uploading the pitch demo on Table Football Monthly my Inbox was overloaded with enquiries. Clearly I wasn’t the only one with a passion for ‘atmospheric’ pitches. So we move on to part 2 of this adventure. How many to make, what to charge and how to package – I’ll know about that lot in a few weeks!

Next door to my Studio is a Blood and Urine testing Laboratory – and we get along very well. The Owner’s comment: “All this for a bloody table football pitch?”

It was a fair point but then he never saw Star Soccer/The Big Match back in the 70s. George Best caked in mud with his socks rolled down, being unable to tell the teams apart as wet mud and steam rose from the players, ball stopping dead in the centre-circle, gloveless Keepers with hair matted to mud and sweat-streaked foreheads, Double Diamond beer Advertising hoardings with paint flaking, three wheeled, sky blue invalid carriages parked behind corner flags, smiling, drenched Coppers watching the game rather than the fans, sliding tackles that covered endless yards and left a wake behind them and the likes of Huw Johns, Barry Davies, Gerald Sinstadt and Brian Moore peering through the gloom trying to explain what was happening. I’m sure I’m not alone when I say that I can hear, smell and see all of these things when I look at a muddy pitch.