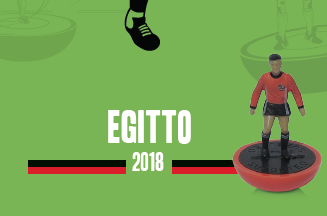 Mo Salah has finally got his own official Subbuteo team

Mo Salah is a Champions League winner, African Player of the Year and one of the best footballers in the world.

However, he is missing one major honour.

He has not been recreated in an official Subbuteo set. Until now.

The Liverpool and Egyptian star will feature in an official Subbuteo team set for the first time as part of the Egypt 2018 World Cup side. The team that made it to the Russian tournament – albeit with a half-fit Salah after his Champions League Final tumble – will be available to buyers next month.

The set will go on sale in Italy as part of an 80-team range that celebrates some of the best international teams in history and is the first time a modern Egypt Subbuteo team has been produced.

A first look at the box shows the nation’s traditional red shirts, black shorts and black socks, as well as the Egyptian national team badge.

Unfortunately for UK buyers the set will only be on sale in Italy as part of Centauria’s deal to license Subbuteo for the 80-team range. It is being sold as a part-work and the range is called the Subbuteo La Leggenda Platinum Edition.

Despite being modern sets the Platinum Edition is the first of the La Leggenda range to be based on old-style heavyweight Subbuteo players from the 1960s and 1970s and means the iconic green boxes have been recreated for the team.

A total of 51 teams have been announced, with Egypt followed by Senegal 2002 – who shocked holders France by winning the opening game of World Cup 2002. Colombia 2014 – the year James Rodriguez won the World Cup Golden Ball – and Cuba 1938 have also been revealed for the first time.

The La Leggenda Platinum Edition range is on sale in Italy only but sets are available for UK buyers on eBay.