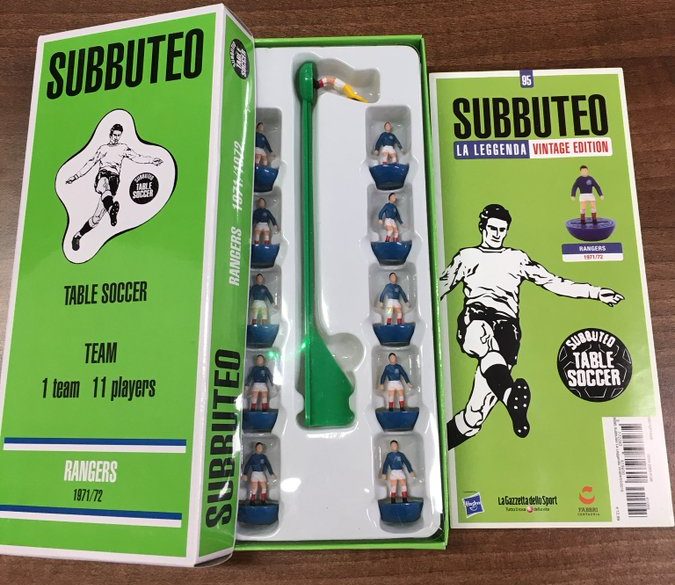 A new Subbuteo team has thrilled Rangers coach Michael Beale after it was gifted to him this week.

The former Liverpool, Chelsea and Sao Paulo coach, who currently works under Steven Gerrard at Ibrox, received a Rangers team and took to Twitter to celebrate the addition to his collection.

He said: “What a fantastic gift to receive on my return to work. Thank you @stuartid – another top addition to my collection of classic teams.”

What a fantastic gift to receive on my return to work. Thank you @stuartid – another top addition to my collection of classic teams 🔴⚪️🔵 pic.twitter.com/Ph7Pw9NfIi

The team itself is a fairly modern Subbuteo set. The La Leggenda Vintage Edition range is an official recreation of classic Subbuteo teams by respected Italian maker Parodi.

The sets come in stunning boxes and are more detailed than classic Subbuteo and feature some of the greatest club sides in history. Michael’s set commemorates the European Cup Winners Cup winners of 1971/72.

The La Leggenda Vintage Edition is not the latest Rangers set to be created in Subbuteo – that honour goes to the Paul Lamond Rangers set currently on sale in Hamleys.

However, it is one of the nicest. But there are plenty to choose from for Rangers fans.

Originally Rangers, like many teams who play in blue, used reference number 002, which was a simple blue shirts, white shorts and blue socks. Not entirely accurate, the reference was the closest to Rangers for several years.

In the 1960s Rangers used reference 053, an all-blue side with red and white trim. However, fans had to wait until 1979 for this team to get white shorts and truly look like the Glaswegian giants.

In 1983 Rangers finally got its own unique reference number on 451, with the kit now looking like Rangers with blue shirts, white shorts and red socks. A Rangers kit with black socks was added in the 1980s to match the kits of the time (reference 598).

In the 1990s Rangers shared a reference with Chesterfield (655) before the stunning reference 769 was released in 1995.

Rangers’ only away kit Subbuteo team was launched in 1995 and was a rare orange and blue stripes kit. This team is incredibly rare as Subbuteo’s popularity dropped off in the 1990s after the brand’s sale to Hasbro. If Rangers fans have a version it could be one of the more valuable British Subbuteo sides.