The end of the football season is all about those trophies.

From Champions League to Playoff competitions, clubs across the world will be getting their hands on the ultimate prize – some silverware.

We are at the end of the season for many European leagues so it is fitting that one Subbuteo fan has shared pictures of his jaw-dropping collection of trophies.

Keith kindly allowed us to share images of a vast Subbuteo collection featuring teams, grandstands and accessories. The collection is astonishing but the one picture that caught our eye was this incredible collection of Subbuteo trophies.

The trophies include the old Subbuteo Cup, the FA Cup, European Cup and two versions of the modern World Cup trophy. However, what really catches the eye is the inclusion of pristine-looking Jules Rimet and League Cup trophies.

The Jules Rimet, famously won by England in 1966, is a rare Subbuteo trophy and can fetch lots of interest when they go on sale but that is nothing compared to the holy grail of Subbuteo items – the League Cup. 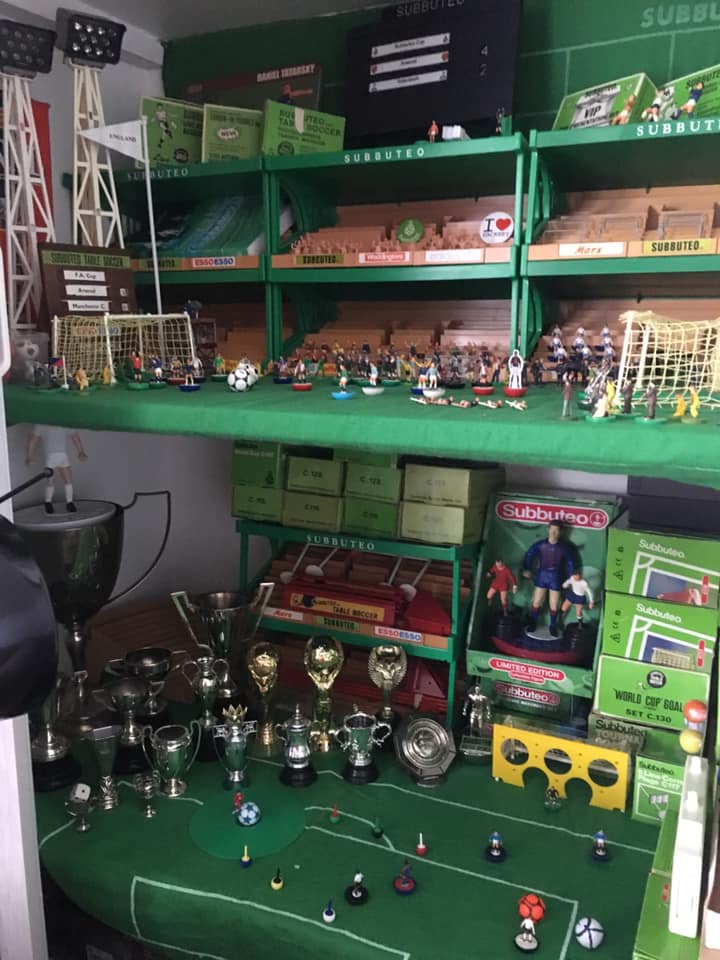 Prone to break easily and incredibly rare, the three-handled trophy is a Subbuteo collector’s dream and often goes for huge amounts on eBay on the rare occasion one is placed up for sale. We wrote a little about the enduring love Subbuteo fans have for the much-maligned trophy here.

In fact, an eBay lot is currently on £49 from 13 bids and that price is expected to rise very quickly.

The picture is also notable for a few non-Subbuteo products. We particularly liked the Community Shield, which is on sale at Subbuteo World at the moment for around £25.

This is an immaculately presented collection with plenty of old Subbuteo items that draw the eye. The England flag, Subbuteo badge and pristine box sets really are a joy to see.

But that Subbuteo League Cup will always steal the show.

A hand-built Subbuteo stadium with a stunning Main Stand