Subbuteo collectors will buy up everything from historic heavyweight teams from the 1970s to modern teams complete with sponsors and club badges.

From balls and scoreboards to trophies and cameramen, there is an almost endless list of accessories Subbuteo collectors and fans will buy if the price is right. But is the most popular and most beloved Subbuteo item of all time not actually linked to playing the game?

I am talking, of course, about the famous team colour charts. The posters, which often appeared once you unfolded a Subbuteo catalogue, are almost universally revered by Subbuteo collectors and lapsed fans of the came who will fondly remember thumbing through them and hanging them on the wall.

In modern times the famous Subbuteo colour team charts are the inspiration for some stunning single player displays such as this one, which is lit using LEDs but is based on the simple premise of the Subbuteo team colour chart.

Why, after nearly 50 years does the Subbuteo team colours chart hold such a fond place in our memories? After all, it is right up there with Shoot League Ladders and Roy of the Rovers in the eyes of football fans of a certain age. 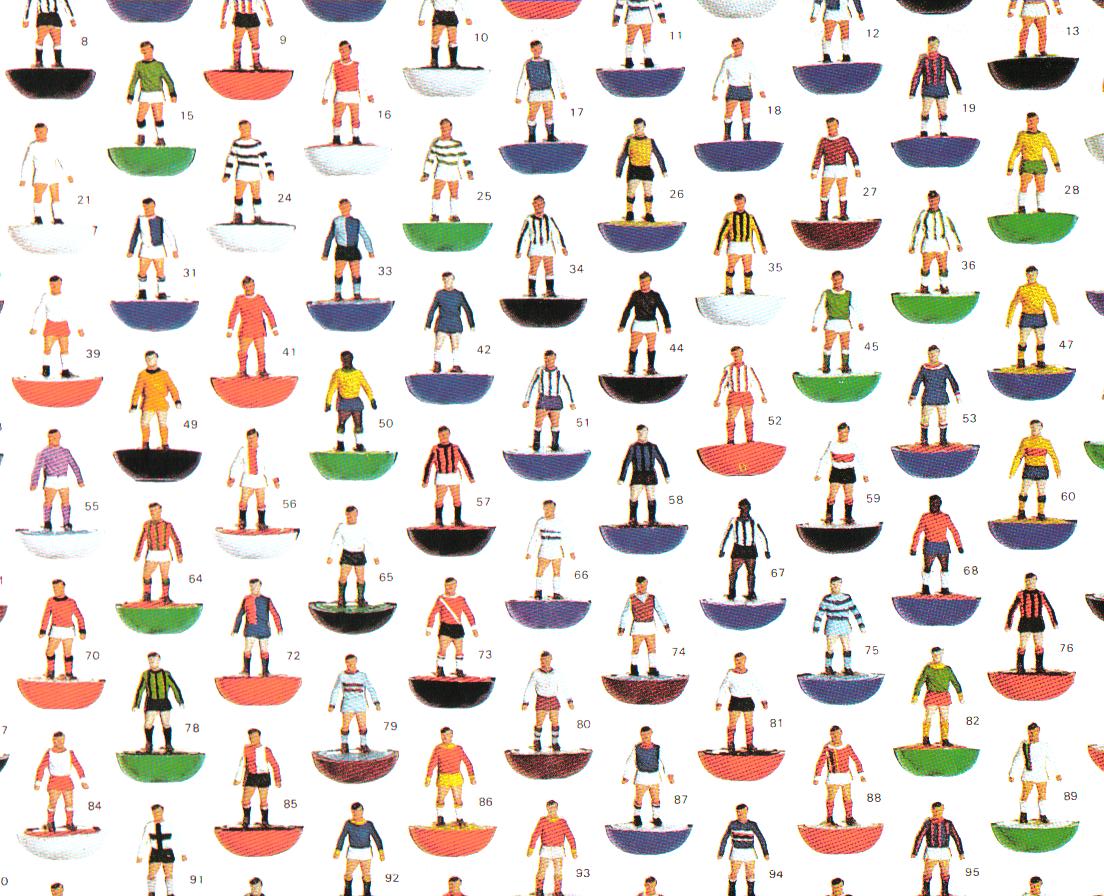 It may be that the Subbuteo posters were actually incredibly useful. There is no official resource for Subbuteo collectors when it comes to working out which team is which and what the various reference numbers are. Nowadays we have the brilliant Peter Upton Subbuteo site – but even he got most of his information from these posters.

Down the years new teams, different colour combinations and changes to the Subbuteo range were announced via the simple team colour chart, which was updated regularly with new additions.

For rarer sets, anomalies in the range and collectors the colour charts were the only way to catalogue a Subbuteo collection.

But there may be other reasons why the Subbuteo colour charts are so loved. Years before Steve Jobs made Apple a household name with devices that were simplified and simplified again, Subbuteo was taking the world by storm. Minimalist, simple design can become iconic and the basic shape of a Subbuteo player is now one of the most beloved and recognisable football-related trademarks in the world.

The stance of the player, the curved base and the simple, bold colours are instantly recognisable for football fans and that design became so famous because of those posters. It is no surprise the most popular posters are from the early 1970s, where a simple white background allowed the static rows of Subbuteo players to pop out of the page. Their colours were vivid against the background and even if it was a complete accident, the early posters are a minimalist design classic. 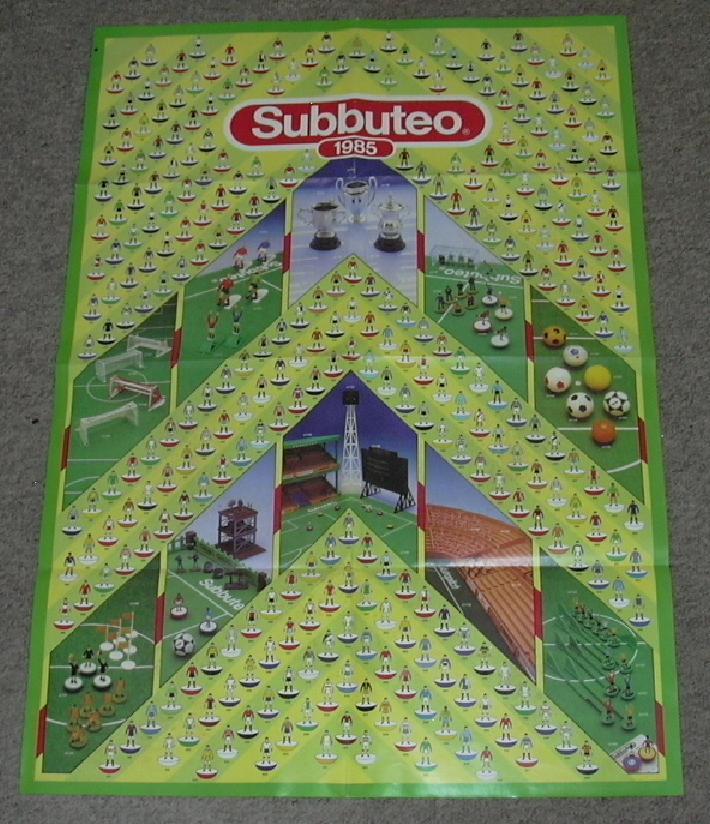 It also appealed to collectors. The little players, all lined up and neatly labelled is almost irresistable to a collector of anything. A full set looks magnificent, while a missing player – a white empty space in the poster – would be jarring and uncomfortable. There is something satisfying about rows of Subbuteo players, all numbered and labelled and ready to buy. It reminds us now of how Subbuteo shops looked, when vivid green boxes of teams lined up in rows to tempt us into parting with our cash.

As Subbuteo grew the posters ditched the white background for more stylised designs. Some were winners; the Italia 90 poster was a beautiful arrow-patterned colours chart that stands out from the crowd. Others were victims of the period. The 1990s posters reverted to a white background but surrounded the players with photos and bright images of the game being played. It maybe dampened the classic affect but would still look fantastic on any wall. 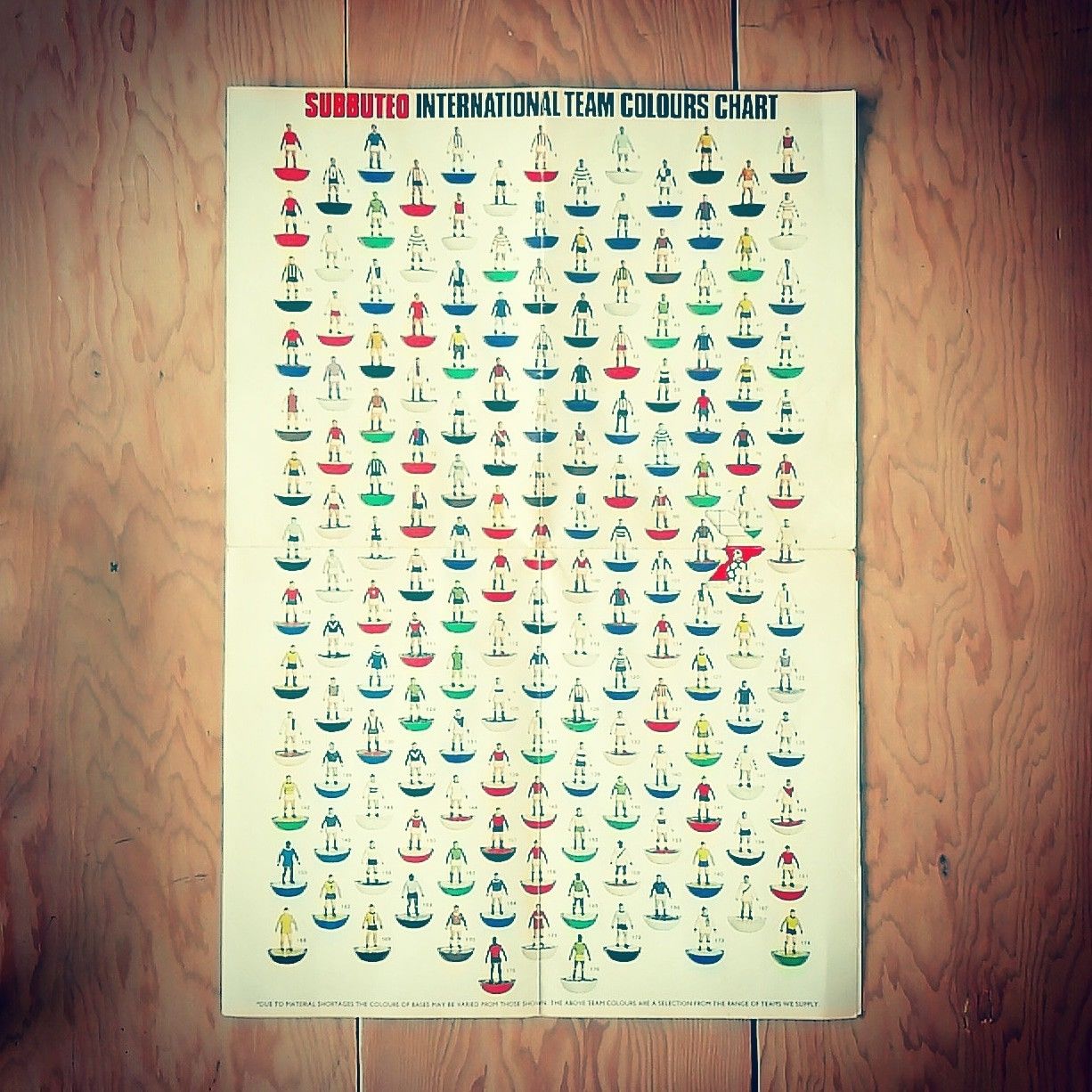 The posters are also collectable in themselves now. Rarer ones with the classic white background design go for £10 or more, while international posters and those released in other European countries add an exotic touch of clash to the range. 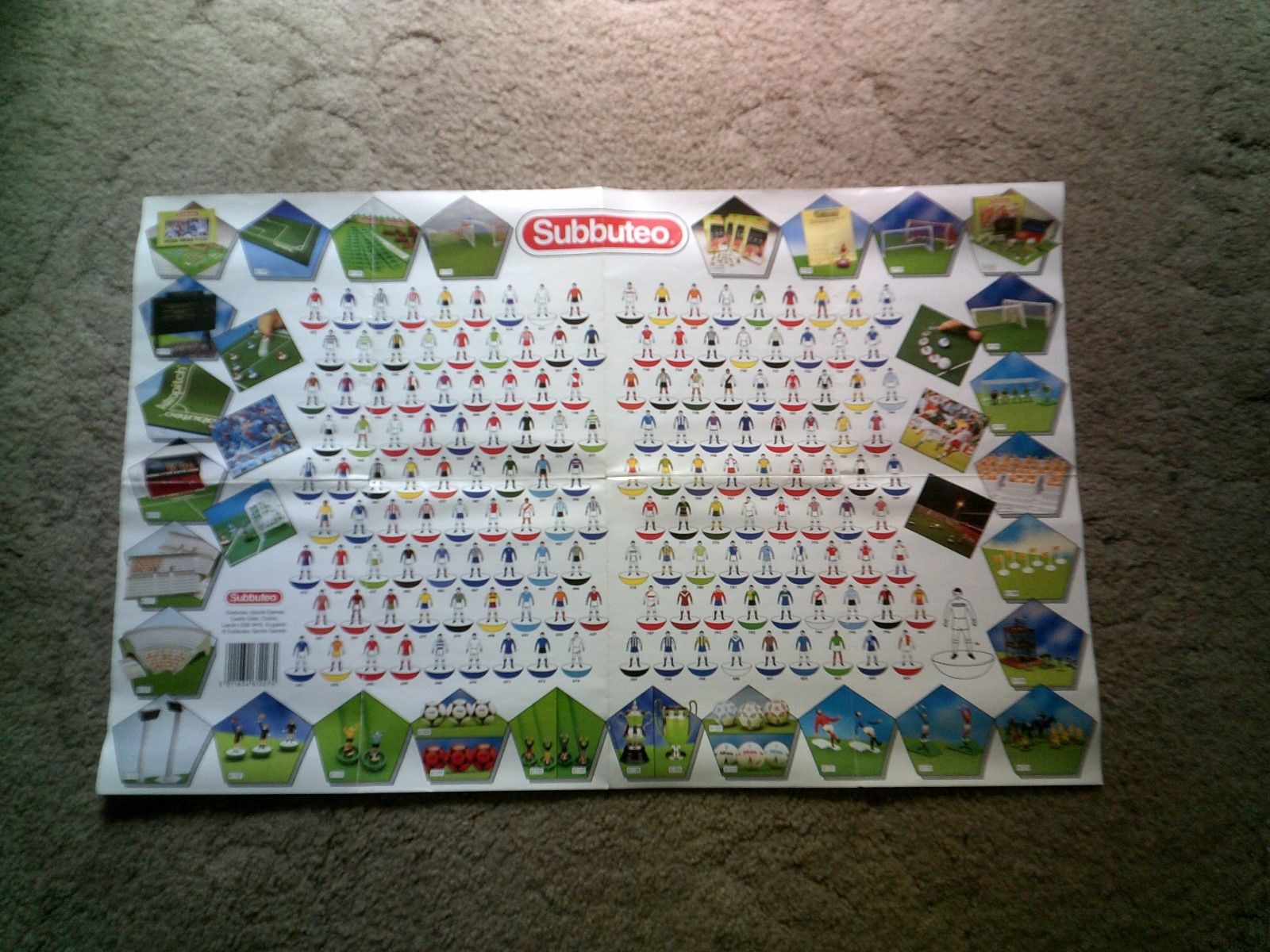 Don’t believe us? Take a look at what happened when people started sharing their team colours on Twitter.