Home News Subbuteo.Online is featured in the Daily Record in Scotland
News

I did a quick write up of the game and video here.

Anyway, I was then contacted by a journalist from the Daily Record, who wanted to use the video on their website – and here it is! The Record is the national newspaper in Scotland so I’m counting this a big deal.

The reaction to the video has been really positive and I’m hoping to brush up my video-making skills over the next few weeks and months. That means lots more goals and recreations of famous matches.

Next up I’ll be doing something (just about) south of Hadrian’s Wall, but if you have any suggestions feel free to get in touch at subbuteoonline@gmail.com. 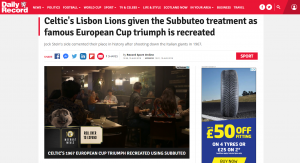