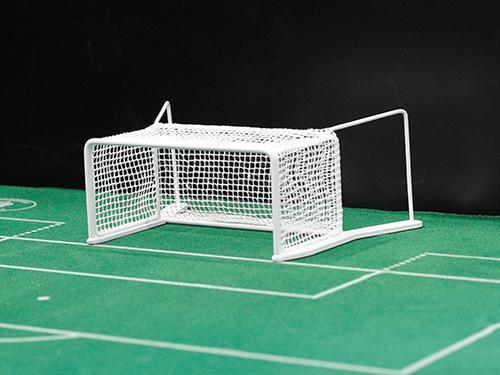 The best Subbuteo goals of all time debate is a tricky one.

Subbuteo does many things well; the beautiful kit designs, excellent accessories such as the stadiums, and the detailed trophies are all superb additions to the game.

But Subbuteo goals have always been the least impressive of the vast Subbuteo empire. Often struggling between looking good and being practical, early goals were pretty clunky, joyless designs.

Additions such as the weird sticking tape to stop the ball bouncing back out were unsuccessful and aesthetically troublesome – so it’s time to settle the debate once and for all and create the ultimate guide to Subbuteo goals.

Subbuteo made a lot of types of goal and others have also created unofficial versions. We are not going to list every goal ever created but hopefully this is a sample of the best around at every price point.

The European goals, are a thing of beauty designed to replicate the goals used in the 1984 European Championships.

It had no back bar and the net instead hooked into the base.

Peter Upton, the Subbuteo historian, was not a fan of them from a practical point of view: “The attractive curved back supports make for a robust goal, but the nets were so narrow and tight that the ball would usually bounce out again, leading to many an argument or fight over whether it had gone in at all.”

The goals look great and have large screw holes in the bases. If you’re looking for a set for a stadium design these are an excellent choice at around £10-£20 on eBay.

The best goals Subbuteo ever made. Based on the Championship goals (C181) from the early 1980s, the only real issue they had was that they were difficult to put together.

After that they look amazing with their European style and deep nets. However, you may have to do some DIY to ensure the ball doesn’t go under the net and out the back.

The best-looking and most-loved Subbuteo goals of all time. If you have the change to get a set, take it.

Italia 90 goals were the successor to the European goals and are almost identical. However, they include the colours of the Italian flag on the net and are deeper than their predecessors.

In high demand, these will cost you a little bit more but look incredible and are better for those who play the game as the ball is more likely to stay in the net.

They cost around £20 on eBay if youy

While we’re on the subject of goals themed around tournaments the USA 94 goals look great and come from one of the most underrated Subbuteo box sets of all time.

They have deep, coloured nets, attractive posts and are pretty durable. And they definitely do not break in half at the crossbar like the infamous Diana Ross penalty kick of the time.

Again, you can pick them up for less than £20 on eBay.

The problem with Subbuteo goals is that they need a gap at the back to allow the goalkeeper’s stick to operate. The standard Subbuteo goals (C148) rarely changed from the 1970s onwards and solved this by having a back bar underneath the net.

It is a practical solution but does not look very good. Instead of the ball nestling in the net it usually bounces straight back out.

You can get them in most box sets and at a couple of pound for two they are the cheapest and probably most durable option for beginners.

Probably Subbuteo’s best seller. Using an unusual combination of one red net and one blue net, the goals did away with the back bar.

They look good and the net does bulge when you score but the net also has a habit of coming loose and the goals can bend over time.

Tournament goals, which came in to replace the ‘new goals’, keep the tacky green base but are a bit more durable and are designed like the World Cup goals in looks if you want something a little different.

Astrobase makes a selection of modern goals, usually from metal, for use by pro players and serious stadium designers.

They don’t come cheap at around £40 a pair but just look at them. They are simply beautiful, and come with modern methods of securing them to the playing surface.

If you are a serious Subbuteo player these are some of the best professional goals money can buy. You can get them here.

Peppe is an Italian seller on Subbuteo and he is a genius. He makes metal goals in the style of those used at famous stadiums and in famous matches throughout history.

They include the likes of the Bernabeu, San Siro and others and the craft work and design skills employed make these a must for anybody building a Subbuteo stadium with a nostalgic feel.

The bad news is we cannot find these anywhere. These stunning heavy-duty goals are used by Edinburgh Subbuteo club and we absolutely love them. If you ever spot them on eBay snap them up.

If you think we’ve missed a Subbuteo goal get in touch at subbuteoonline@gmail.com or on Twitter at @SubbuteoOnline and we’ll add it to the list.