Subbuteo goes beyond football, and it was the discovery of the rugby version that rekindled my interest in Subbuteo more than a decade ago.

Subbuteo Rugby was a game of complexities and confusion. There was a combined set for league and union, but it was never marketed perhaps as well as it should have been, and it was taken off the production line in the early 1980s.

But there is still demand for newly painted teams, and the originals fetch tidy sums on eBay and at collectors fairs.

Paul Lloyd owns World Subbuteo Rugby, a shop which paints replicas of the original reference teams as well as modern-day and retro strips. He takes large numbers of orders every week from across the world for a wide range of teams.

Many years ago, through my job as editor of Love Rugby League, I interviewed Paul about Subbuteo Rugby and its history.

He said: “The rules were not clear or definitive either for League or Union. In Union more so than League, certain aspects of the game were hard to replicate. However, perhaps in hindsight more time and development should have been spent on them.

“There was at one time a meeting to discuss if two separate versions should be made, one for League and one for Union. The pitch was neither Union or League, it was a hybrid one.

“Nowadays with the growing popularity of both codes of the game and printing of teams, the game could have been far more successful.” 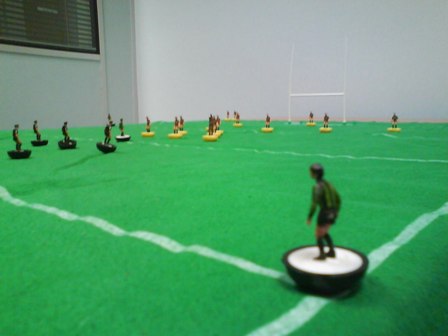 With many sports markets dominated by football, rugby league fans are often keen to support their sport by purchasing related games, videos and books. Rugby league has made it on to video games consoles in recent years, while the number of rugby league publications in bookshops have increased greatly over recent years.

Subbuteo Rugby first appeared in the mid 1950’s, but was only available for about four years due to poor sales. However, it was relaunched in 1968 with an international edition which included a pitch, two teams, two goals, a scrummer, two goalkickers and the rules.

The layout was fairly simple – a green baize pitch with two goals at either end. The scrummer was a machine with a hole in the top and six holes on the outside, aiming to replicate scrums. The two goalkickers were special figures that had a moving kicking leg, which could be flicked at the ball for goal kicks.

It was produced throughout the 1970s, but last appeared in catalogues in 1981. 37 reference teams were produced during this time, with many variations. Due to the mix of union and league, teams shared reference numbers. Notable league related designs were Ref 9 (Bradford), Ref 12 (Hull KR), Ref 16 (St Helens), Ref 20 (Leeds), Ref 25 (Rochdale) and many more.

A collection of modern rugby league and union teams, painted by Paul Lloyd

It is thought that the fast flowing nature of rugby league suit table top games far more so than union.

Despite production and sales of Subbuteo dwindling over recent years, there are thousands of items going on eBay each week, and Lloyd believes there is still a market for all forms of Subbuteo.

He added: “There is a market. Over 3,000 items are sold per week on eBay, there are dozens of people producing their own figures and selling them which proves that the market is there.

“If I owned the rights, I would create separate union and league editions, with all the professional and international teams done. The goalposts would be modern and I would make a new kicker model for drop goals. Then a range of accessories, stadia, fencing, flags and the like.”